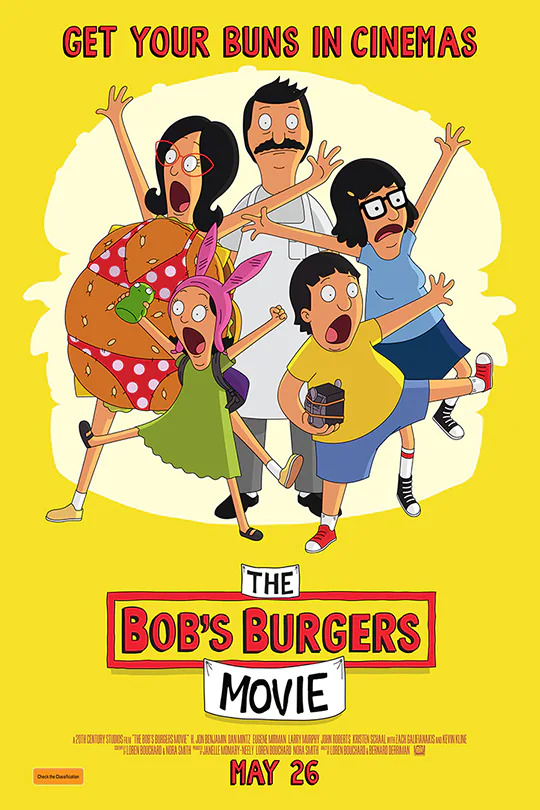 Following in the footsteps of "The Simpsons" and "South Park", Loren Bouchard's "Bob's Burgers" makes its way to the big screen, bringing the rambunctious and lovable family into cinemas around the world. In a movie that seems like three episodes put together, directors Bouchard and Bernard Derriman take everything great about the show and jam-pack them into a fun movie that the whole family can enjoy.

The movie follows the Belcher family: Bob (H. Jon Benjamin) and his wife Linda (John Roberts), who have three kids, Tina (Dan Mintz), Gene (Eugene Mirman) and Louise (Kristen Schaal). They own the "Bob's Burgers" shop in town, which is now falling into hard financial times. This forces Bob and Linda to find a way to pay or extend their payment due for the shop since they do not have the money.

However, at the same time, their little town is rocked by a mysterious dead body that shows up underneath the family's restaurant. Now trying to uncover the mysterious murder of a local carnie, the kids dig deeper and deeper into the history of the Fischoeder family, who are the prime suspects in the murder.

After spending over ten years developing these characters and their small town, the filmmakers are able to dive right into the plot and the struggles the characters are going through at the time. Translating the characters from the show to the big screen was done very well, and the characters don't seem to lose their charm or spark that the longtime fans have fallen in love with. Bob is the worrisome, slightly depressed character that is fun to watch, while his wife is the complete opposite of that, being totally optimistic and never letting anything get her down. I think Benjamin and Roberts do a great job of sharing the screen together, and neither really overpower the other. They have great chemistry, and are able to work off the other actor and deliver lines in such a way that it works perfectly for what the filmmakers are trying to go for.

The same can be said for their children. Each one is so uniquely different and wonderful that it is not hard to differentiate them. Tina is the more shy, awkward teenager that is going through a phase of being obsessed with butts. Gene is just the lovable goofball that can be found in every family; he doesn't let anyone affect or change him from who he is. Louise, on the other hand, is the devious and diabolical member of the family who is shielded by her innocence and pink bunny ears hat. The three actors that play these kids also do a wonderful job of bringing their characters into a film like this, and I enjoyed how they saw a lot of screen time throughout the film.

The plot, like mentioned earlier, seems like the creators took three episodes and put them together, with each episode having to deal with a plot line in the next and so on. Because of this, at times, the movie feels convoluted or like it doesn't really know how to pace itself, which throws off the tone at times. You don't really know what the filmmakers are going for in some parts, and some moments just seem completely unnecessary. However, with that being said, the movie is still tons of fun and is engaging for the audience. It does keep you on the edge of your seat with the whole murder-mystery plot line, but it does take a while for the film to get there. But other than that, it is still lots of fun and has a surprisingly sweet and heartfelt aspect to it at times.

One thing I honestly did enjoy about the film immensely though is the inclusion of the musical genre. Now, the characters don't go around singing non-stop for the hour and a half runtime, but there are songs sung by the character sprinkled throughout that are a lot of fun to watch. It almost reminds me of the style of Lin-Manuel Miranda's music, especially Grover's (David Wain) song, "Not That Evil" towards the end of the film. Even in that example, it shows how they took something cliche, like a villain's monologue about why he did what he did, and put its own fun twist on it.

Overall, I think this was a pretty good film from the creators of the show, and they were able to capture everything great about the show that kept the fans coming back week after week. Sure, there are some things that could have been better or tightened up, but I still had a blast with it, and I'm sure the fans of this series did as well.