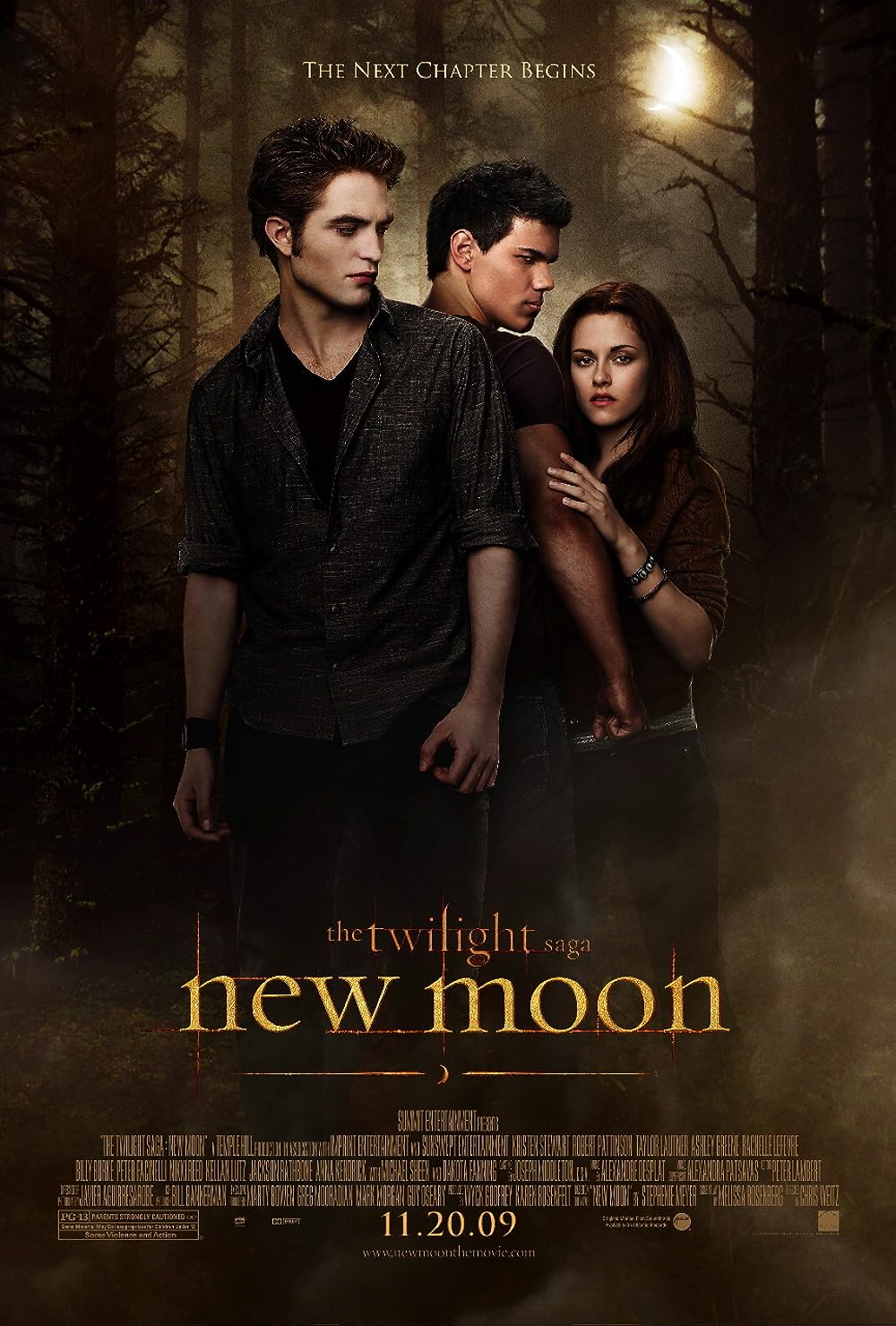 2008's "Twilight" took the world by storm, inspiring many of fans (especially teenage girls) to go out and buy the books and become obsessed with the love story of Bella Swan and Edward Cullen. The first movie focused mainly on those two characters, but would add in the character of Jacob Black here and there, foreshadowing him as a threat to their relationship. Now, in the second installment of this franchise, the movie takes a radical turn from what was being set up in its predecessor, allowing the movie to focus mainly on the relationship between Bella and Jacob in a sequel that still has the same charm, but is slightly disappointing following the first film.

The reason that this movie focuses heavily on the relationship between Bella (Kristen Stewart) and Jacob (Taylor Lautner) is due to the fact that Edward (Robert Pattinson) left Bella at the start of this movie. Everything was going good in their relationship, besides Bella's constant worry of getting older and appearing unattractive to her partner. However, when an incident at Bella's surprise birthday party at the Cullen house puts her in danger, Edward is forced to leave to keep her safe and live a normal life.

Since his departure from the small town of Forks, Washington, Bella falls into a deep depression, causing her father, Charlie (Billy Burke) to start to worry about his daughter. When he convinces her to start hanging out with Jacob, she starts to forget about her previous relationship and starts to fall for Jacob. Yet, when dark secrets come out and Jacob is reveled to be a werewolf, Bella is now in danger once again, both by the fear of having her heart broken again and by the clutches of Victoria (Rachelle Lefevre), who is the scorned vampire from the first one, who is out for revenge.

The first one isn't a masterpiece or something special. It was simply created to entertain audiences as a popcorn film and nothing more. The second one takes the same approach, but does it worse than the first one did. I think a major positive about the first movie was Pattinson, so by taking him out of this second installment, the movie loses that whole vibe and feeling that the film should have created for the viewer. Now, with Jacob being the main male protagonist in this film, the vibe is completely off and the tone just seems much different. Jacob is not mysterious like Edward is, and seems to try too hard to win Bella's affection.

At the same time, the movie doesn't have much of a pace, and kind of just throws a bunch of events together in a timeline. Some parts of the movie move at a very quick pace, and some move painfully slowly. One major standout moment is the whole part about Bella being depressed about Edward leaving, forcing her to cry staring out the window and having nightmares every night. They could have shown it maybe once, but they showed it numerous times and kept going back to that. They try to be edgy and relate to teenagers on a personal and emotional level, but I just find it very convoluted and annoying after a while.

Stewart just kind of misses the mark for this film. Her character isn't fun to watch, and is just annoying throughout this movie. Lautner tries his hardest with what he is giving, and I think he's a lot of fun to watch. Consider the scene where he meets Mike (Michael Welch) and Bella at the movie theater. It is really fun to watch Jacob roast and make fun of Mike, as well as just kind of putting his own flair on the character of Jacob. However, Lautner isn't able to make up for Pattinson's absence, and it definitely shows throughout the movie. I understand they are following the source material of what Stephenie Meyer wrote, but the fact of taking Edward out of the picture is bewildering to me.

Also on the fact of the movie being convoluted in parts, they introduce a lot of different elements and plot lines into this movie, such as the Volturi and the backstory of the werewolves in the small Washington town. They hint at it, but never really fully explore either of those aspects of the film. The viewer is left feeling lost and uninterested in what these new plot elements are as the movie has a hard time introducing and explaining what these two things are. It's frustrating, and they kinda just miss the whole purpose of making a love story to entertain audiences.

There is no doubt that this film is entertaining and fun, but it is definitely a step-down from the film that came before it. It's disappointing, and it seems like the filmmakers got too much of a big head when going forward into this movie. They could have tried to focus more on elements of Jacob and Edward together, but rather separates them into two completely different parts of the film. It's frustrating, but enjoyable nonetheless.