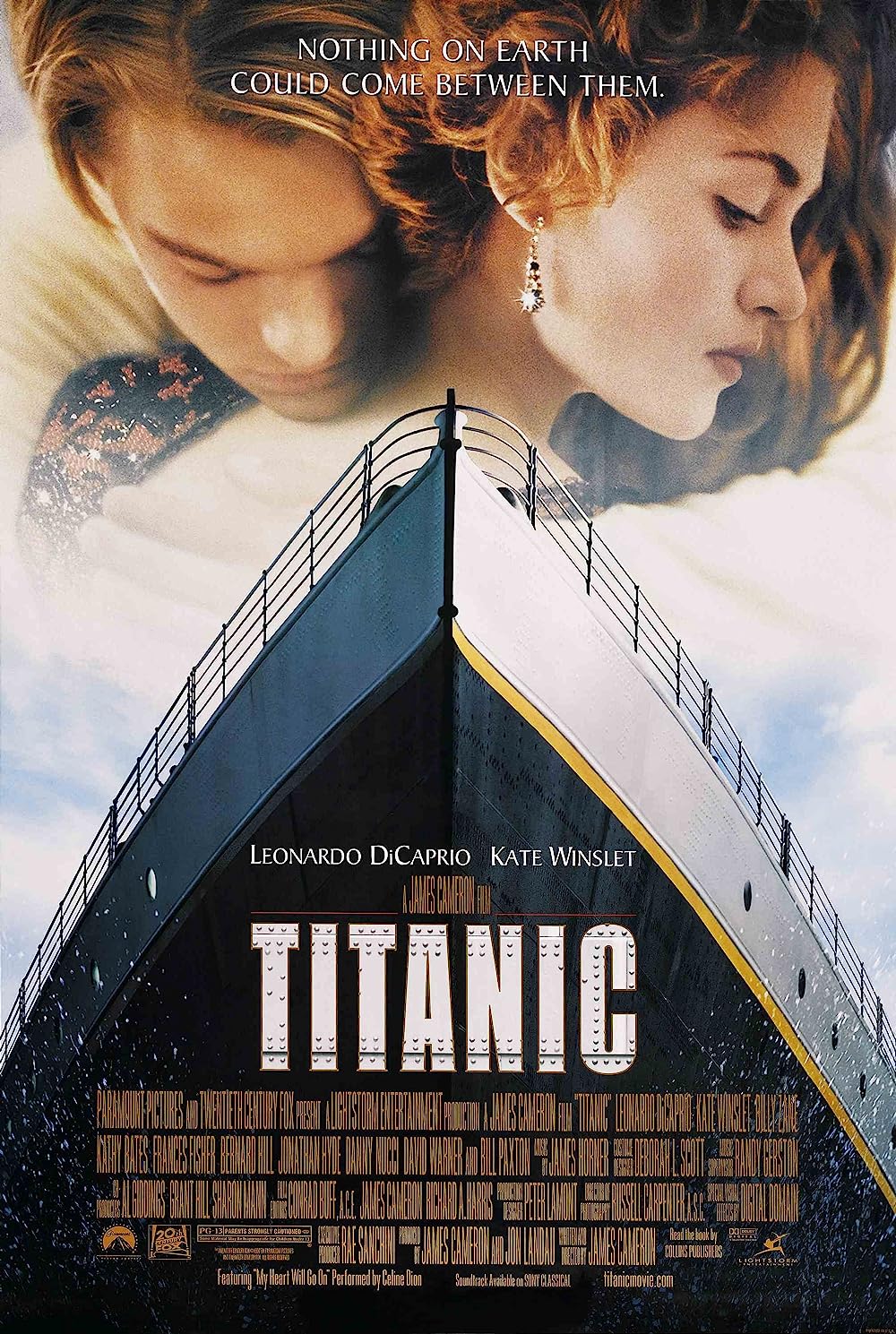 The sinking of the Titanic is perhaps one of the biggest and most shocking modern disasters in the world. While on its maiden voyage, the ship hit a giant iceberg, causing the boat to sink to the bottom of the ocean, resulting in the death of more than half of the passengers onboard. In 1997, James Cameron, who is coming off the success from the first two Terminator films and "Aliens", decides to craft a beautifully moving film that details the tragedy of the RMS Titanic, while also depicting one of the best romances ever seen on film.

Our two main characters would have never met if it wasn't for the Titanic. Rose (Kate Winslet) comes from an extremely rich family, who is to be married to Cal Hockley (Billy Zane), who also comes from a very rich background. However, she is very unhappy with the arrangement, and just wants to have an adventure with someone she truly loves. That's where Jack (Leonardo DiCaprio) enters the picture, a penniless artist who wins his way on the ship from a poker game.

They meet when Rose tries to fling herself off the ship, and Jack is able to talk her down from the ledge, literally. From there, they start to spend lots of time together, exploring each other's past and their roles in society. They fall in love, even though they have only known each other for a couple of days. When the ship hits the iceberg, they must try to find a way for them to both survive the tragedy, putting their love to the ultimate test.

Cameron completely transports the viewers back into 1912 with this film. Everything about this movie is so immersive and makes the viewer feel like they are right alongside our characters throughout the entire movie. Consider the scene where Jack and his friend, Fabrizio (Danny Nucci), lay their eyes on the ship fro the first time. It feels like we are actually looking at the ship right next to them, marveling at its beauty and size.

Then, when the iceberg crash happens, the viewer spends the next hour on the edge of their seat, engulfed by the tragedy and destruction that is going on around our characters. The entire last half of the film is incredibly hard to watch, especially the famous scene where a mother is comforting her two scared children and the elderly couple laying in bed together, both families waiting to be engulfed by the water. It's heartbreaking, and it never fails to bring a tear to my eye every single time I rewatch this film. At the same time, Cameron is able to detail all of the destruction, as well as heavily focusing on not only our main characters, but the the supporting characters around them.

DiCaprio and Winslet give fantastic performances throughout this film. They have great on-screen chemistry together, such as the scene where Jack draws Rose like "one of his French girls". The entire sequence is so intimate and beautiful, showcasing the love and admiration one has for the other. The fact that she is so comfortable to have him draw her naked, and their ability to joke and be comfortable around each other (excluding where Jack was having a hard time concentrating after seeing the love of his life naked for the first time) is so refreshing and lovely to watch. They are a great couple together, and the urgency and simplistic nature of the relationship is very lovely to watch.

Apart though, they still do an amazing job on-screen. Jack is just oozing charisma and charm, and it's so very hard to not like his character. The same can be said for Rose, but in the opposite sense from Jack. She is so suffocated and held down by her snobby family and friends that she looks for some type of escape, which she finds in Jack.

I also really like the aspect of the film of the researchers, played by Bill Paxton and others, are searching for the long-lost necklace that Rose had. Cameron has Gloria Stuart play older Rose, who is the narrator and the storyteller of what happened on the Titanic and the love story between her and Jack. It's really beautiful seeing how she survived and lived her life after the disaster, and how the spirit of Jack lives on in her.

With that being said, the fact that Jack could have fit on the board in the ocean needs to be mentioned. I am among the group of people that thinks Jack could have easily fit on the board next to Rose. So, from there, I'm conflicted on what I think should have happened. Like everyone else, I would have loved for Jack to survive the wreckage so him and Rose can live their lives together. However, at the same time, I think it was almost necessary for Jack to die, unfortunately. He made Rose promise that she would live her life and go on adventures, which she spent her life doing. If Jack was still alive, would they be able to do that together, or have those adventures that Rose wanted? The honest answer is I don't think so, making Jack's death very necessary for the character of Rose.

Overall, this film just proves how great of a filmmaker Cameron is. He is able to write and direct these masterpieces on film, showcasing love and loss, as well as historical events that changed the course of human history. There is no doubt in my mind that Cameron should be hailed as one of the best filmmakers of all time, and if you don't believe me, go rewatch this movie and his other films. Trust me, you won't be disappointed.