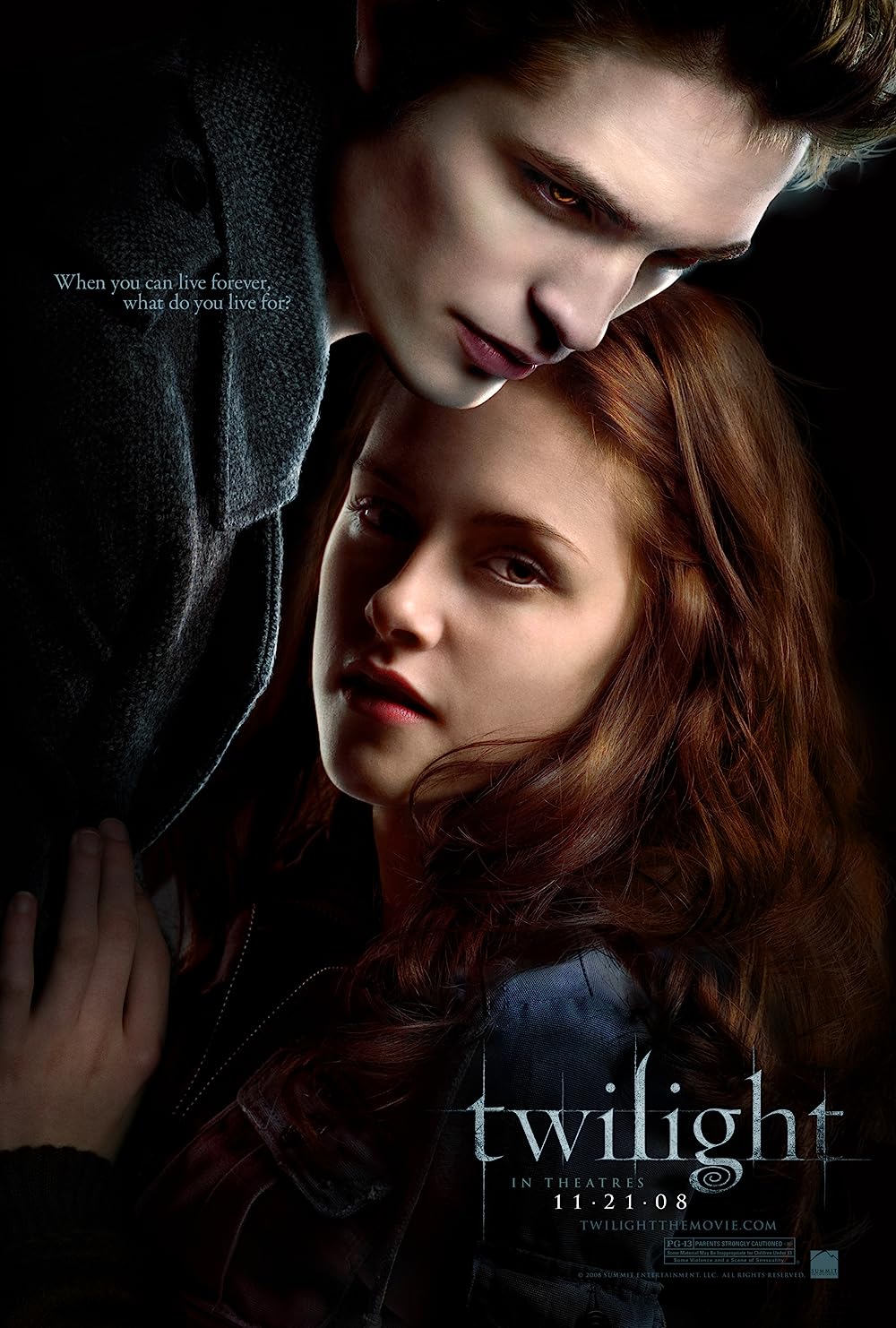 Vampires and romance films have been around since the creation of cinema, so what makes Catherine Hardwicke's adaptation of the Stephenie Meyer novel, "Twilight" any different? Perhaps it's the teenage film genre that makes it standout, or maybe it's the sexy storyline between Bella and Edward that makes viewers crave more from this series? It may not be a masterpiece or contain the best effects or acting, but this first installment in the Twilight Saga is an enjoyable and entertaining film that started the massive franchise that is still around today.

The movie revolves around Bella Swan (Kristen Stewart), who is a junior in high school that has just moved in with her estranged dad, Charlie (Billy Burke). Now living in the small, murky town of Forks, Washington, she is now tasked with stepping out of her comfort zone and make friends with the kids at school. However, she becomes enamored with the mysterious Edward Cullen (Robert Pattinson), who is a pale-skinned loner that hangs around with his adoptive siblings around school.

When she goes deeper and deeper to discover Edward's past and who he and his family in, she finds out their mysterious secret - him and his family are all hundred-year-old vampires. Edward can't keep himself from Bella, stating that her blood is hard to resist. From going as far as to keep her from him to bringing her in closer than ever, Edward and Bella fall in love, trying to figure out a way to keep this relationship between humor and vampire alive for good.

Pattinson, Stewart, and Taylor Lautner (who plays Jacob, an important character in the latter films) were minor characters in major films before this, but it wasn't until the release of this film that it skyrocketed them into superstardom status. The characters in this film are sexy, mysterious, and fun to watch, which I think the three main actors do a great job of. Sure, the acting in this film is quite cheesy and not the best in the entire world, but it is still fun to watch them all interact with one another. It's like a popcorn flick that is both very easy and enjoyable to watch at any time.

Let's consider the character of Edward for a minute. Meyer crafted this beautiful character that is both mysterious and interesting. He has a love for Bella, which is a love he has never felt for anyone in his entire 109 years of living. Pattinson is able to play him in such a way that it does justice to the character in Meyer's novel. He has this certain charm about him that it makes it hard to not love him. I definitely think he is the best character in this film, and Pattinson was the best choice to play this iconic teen vampire.

Personally, one character that stands out to me a lot in these films is Charlie, Bella's dad. He is a very shy and soft-spoken character who has definitely been hurt before. He is just this beautifully crafted character, even if he is just a side-character in this movie. A scene that stands out to me the most in this movie is when Bella leaves Charlie in order to save him from the evil vampires that have descended on the little Washington town. She berates him, and tells him that she hates living with him and needs to leave. You can hear the pain in Burke's voice during this scene, and his acting is incredible throughout this scene. Burke is one of the best actors in this movie in my honest opinion, and I wish we had received more from him.

Like I said earlier, this is a major popcorn film, so therefore there are parts that are incredibly cheesy and unrealistic. The acting and some of the lines of dialogue are cringe-worthy at times, and it kind of takes the viewer out of the plot of the film for a brief period of time. Sure, it makes the teenage female audience swoon, but it doesn't do much for the quality of this movie or how the viewers feel when watching it.

Another thing that is poorly done is the effects throughout this movie. One would describe the running and jumping vampires as looking like puppets, rather than actual actors in those scenes. It's extremely corny, and they definitely could have fixed the effects in the editing room before the release of this film. There are better quality effects and CGI in some TV shows than there are in a major motion picture blockbuster like this one.

The movie concludes on a somewhat positive note, but not before leaving it open for a sequel that will follow Meyer's second novel. The second novel focuses on Jacob Black's character, leaving Edward out of the plot for most of it. By doing this, they will not only be exploring the different characters, but creating the beloved franchise that is still talked and debated about today.