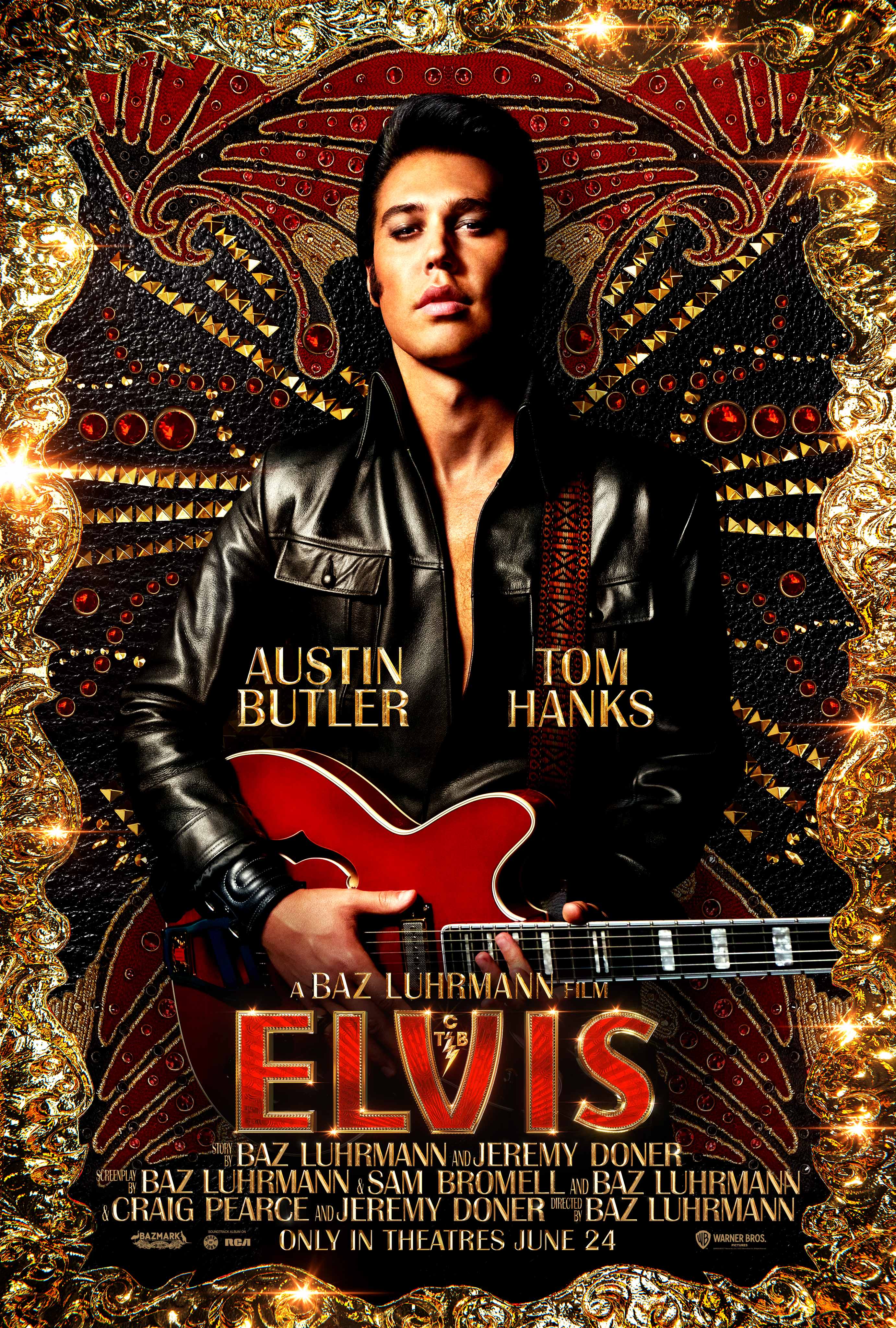 Elvis Presley was known for all of the glitz, the glamour, the jumpsuits, and the screaming girls, which can be found throughout Baz Luhrman's film about the King of Rock & Roll. I have to admit, I did have my reservations and concerns about this movie as I didn't think Luhrman's style of filmmaking would serve Elvis justice. However, from the minute the movie started, I was pleasantly surprised with what Luhrman had done with the story of Elvis, and I loved every second of it.

You have to be living under a rock if you have never heard of Elvis Presley. He completely changed the game, showing the world the different side of Rock & Roll. Luhrman delivers his own jukebox and stylistic version of this Rock & Roll legend's life, tapping in Austin Butler to portray this larger than life character. The movie details his rise to stardom, showing how he was able to come back through adversity and the odds stacked against him. It then goes on to detail the rest of his life, including his Vegas residency performances and his untimely death at the age of 42.

To be completely honest, Luhrman is a hit or a miss for me. I really like "Moulin Rogue!", but honestly did not like "The Great Gatsby". With the previously mentioned film, he was able to make a jukebox film out of that, using the more mystical and magical elements to help further the plot along and give it that type of feel. But for Gatsby, however, I don't think it really worked. The performances were stealer in it, but I had a hard time believing I was watching a movie that should have taken place in the early 1900s when a Jay-Z and Kanye song comes on. That is the biggest reason I was nervous for Elvis. I wasn't sure if Luhrman was able to reign back the eccentrics of his filmmaking style for this movie, but to be completely honest, I loved the over-the-top and stylistic style of filmmaking for this one.

I don't know if it was just the over-the-top nature of Elvis and his personality, but the stylistic and quick style of shooting this movie worked really well, and really did a great job of detailing this story for the audience. At the same time, the movie never really felt slow or dragged on since it was bouncing all over the place and never really gave the audience a chance to catch their breath. Even though this movie was almost three hours long, it felt like no time had passed between the opening credits and the ending credits for this movie.

But let's talk about the best thing about this movie - Butler's performance. It is perhaps one of the best portrayals of a music icon put on screen. Butler really embodied this character of Elvis, giving the role all he has. After a while, it was hard to believe that that wasn't the actual King of Rock & Roll on the screen. Butler's performance really made it feel like Elvis had come back to life and told his own story on the screen. It's beautiful and so much fun, and I tip my hat to him and everyone else who gave great performances in this movie.

At the same time, Tom Hanks does an excellent job of playing Col. Tom Parker, Elvis' manager. Hanks usually plays these beloved and heroic characters, and he is great at playing the good guys. So, I think it is awesome he is given a chance to play the cruel villain in a movie like this. He really shows how he is able to play a despicable character just as good as he can a good guy. It's also crazy how the makeup department was able to change Hank's appearance. Consider the scenes that show Parker in the hospital bed while dying. He looks absolutely nothing like the star that has been around for decades and decades in the film industry.

I also loved the music that was present throughout its movie. I know I complained about modern rap music being present in films like this, but I honestly loved the inclusion of it. In particular, I really liked how Luhrman was able to incorporate Doja Cat's song, "Vegas" (that she did exclusively for the movie) into the song that is being played by the characters in that scene.  Luhrman was able to show how he can include these elements in a film like this seamlessly, which I don't think he was able to do in films like Gatsby, for instance.

Overall, I think this was a great movie to detail Elvis' life. They were able to perfectly showcase everything he has gone through, as well as detailing how historical events affected him and his staff. I couldn't imagine a better person to play the titular character than Butler, and honestly, after watching this movie, I couldn't imagine a better person than Luhrman to bring this vision to life. With this one film, Luhrman was able to change my perspective of his filmmaking style, which I give massive props to.