"Honk for Jesus. Save Your Soul." Film Review 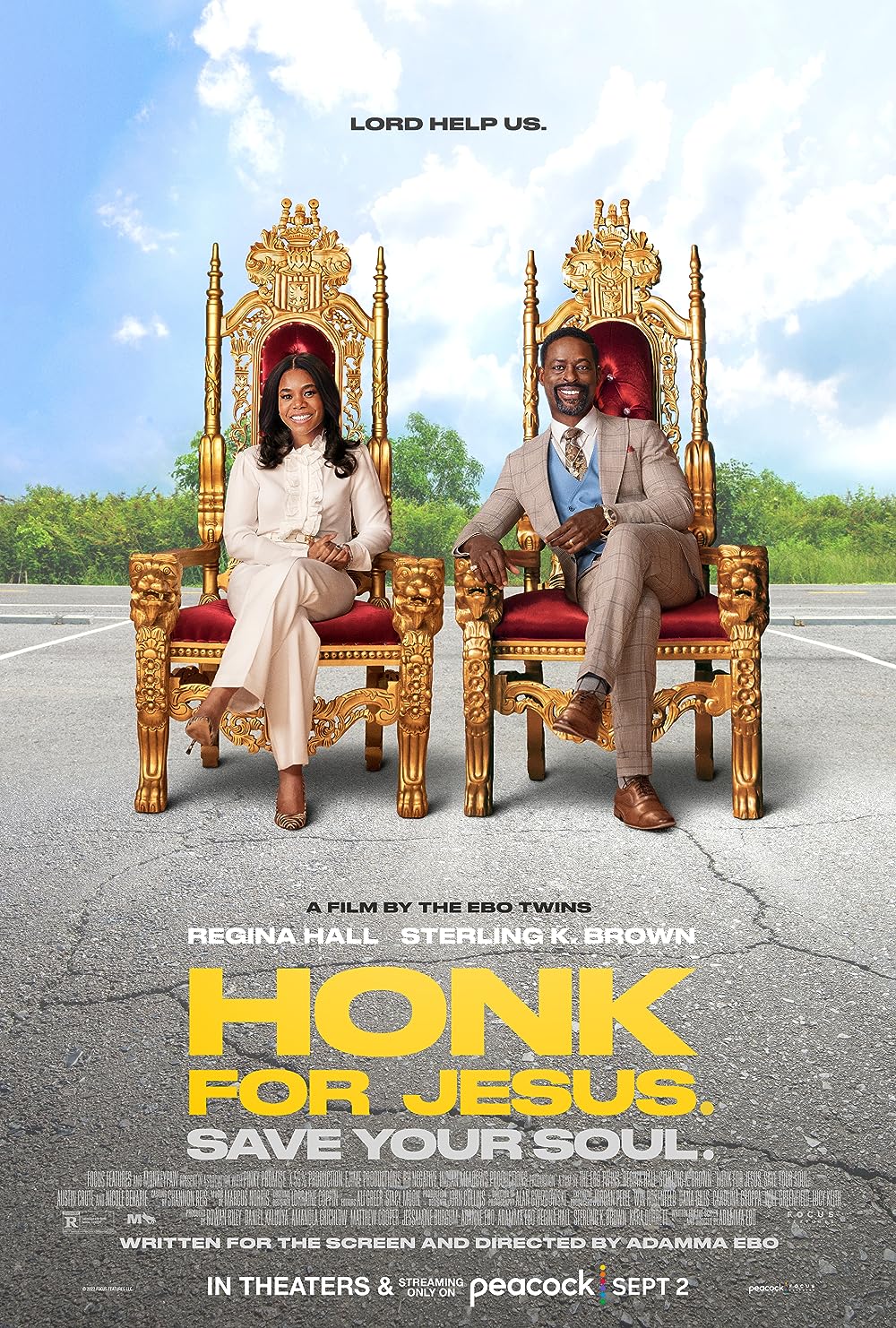 "Honk for Jesus. Save Your Soul." Film Review

There's a moment halfway through Adamma Ebo's film, "Honk for Jesus. Save Your Soul", where pastor Lee-Curtis Childs (Sterling K. Brown) compares his competition to a gimmick, stating that their church is better than any church that will come around. This is the type of humor throughout this whole film, which follows the Childs as they try to rebuild their church's congregation after massive sex scandals come out against the good preacher. With half of the movie filmed documentary-style, this movie satirizes the Christianity religion and how they are so willing to trust and believe their pastors no matter what.

Trinitie (Regina Hall) and Lee-Curtis are doing everything they can to try and rebuild their church. They believe that after the sexual allegations came out, they can come back stronger than ever and have the biggest church in town. Yet, when a rival church is threatening to open on the same Easter as them, the Childs must now figure out a way to open their church's doors successfully, and rebuild their huge congregation that they once had.

I think this is a very good premise and set-up for a film like this. Recently, there have been a lot of controversy and sexual assault allegations against preachers and pastors, making people question the people they have been listening to for years preach the gospel of God. So, since this well-known pastor has just been accused, it's interesting to see how Ebo shows that there are still some people out there who will support these church leaders no matter what. And the fact that she made this an R-rated movie, with sex and strong language, it makes this movie more interesting and funny, in my opinion.

At the same time, I love the fact that Ebo made these characters so self-absorbed and selfish. At one point in their life, they probably were devout Christians and wanted to preach the word of God to everyone that comes into their church. But now, they are so obsessed with having the biggest theatrics in their church and buying the fanciest and most expensive items they can get their hands on. Lee-Curtis mentions this multiple times throughout the film, stating he is grateful for the items and cars and jets that "God has blessed him with". They are very unlikable protagonists, which makes the viewer question if their own pastors or preachers different from these shown on film.

To pull this off, Hall and Knight would have to give great performances as these characters, which they ultimately do. They are able to pull of these cruel and annoying character so effectively that it makes you hate them throughout the movie. However, when they start to reveal their true emotions and feelings towards the end of the movie, it is really hard to not feel bad for the characters or want them to be happy. It seems like the characters were so adamant that they want to be famous and show themselves being happy that they never really focused on themselves.

However, with all of that being said, this movie has horrible pacing and tone changes. The movie tries to be multiple things at once, and it all just doesn't fit together. They want to show these comedic things happen to our main characters, but then try to add in very deep and very serious matters out of the blue. It really ruins the pacing of the movie, and the viewer isn't sure how to feel or how to react when watching it. At the same time, the pacing is just so incredibly off. They include scenes that have no purpose of being in there, or completely ruin a scene by adding in sequences that shouldn't be included. This really ruined the movie in my opinion. It's really hard to enjoy what is going on when the pacing and tone is so off like evident in this movie.

I did really like the aspect of having the movie shift from the regular camera view to a more documentary-style filmmaking. It reminded me of the scenes in "The Office", with our characters staring at the screen and reacting to the people behind the camera. But, Ebo just kind of interchanges the camera views randomly and with no real purpose at all. I remember there is one shot of the regular film camera that literally lasts only one second before shifting back to the documentary-view. There is no real reason for it, but it is somehow included in there for some reason.

Ebo had everything she needed to make this a really good movie. The characters were good, and the actors playing them were even greater. But the problem with this movie is the script and pacing throughout, ruining the viewer's experience when watching the film. If the filmmakers relied more on the comedy aspect of this film and focused on more characters than the pastor and his wife, I think this could have been a much better movie.