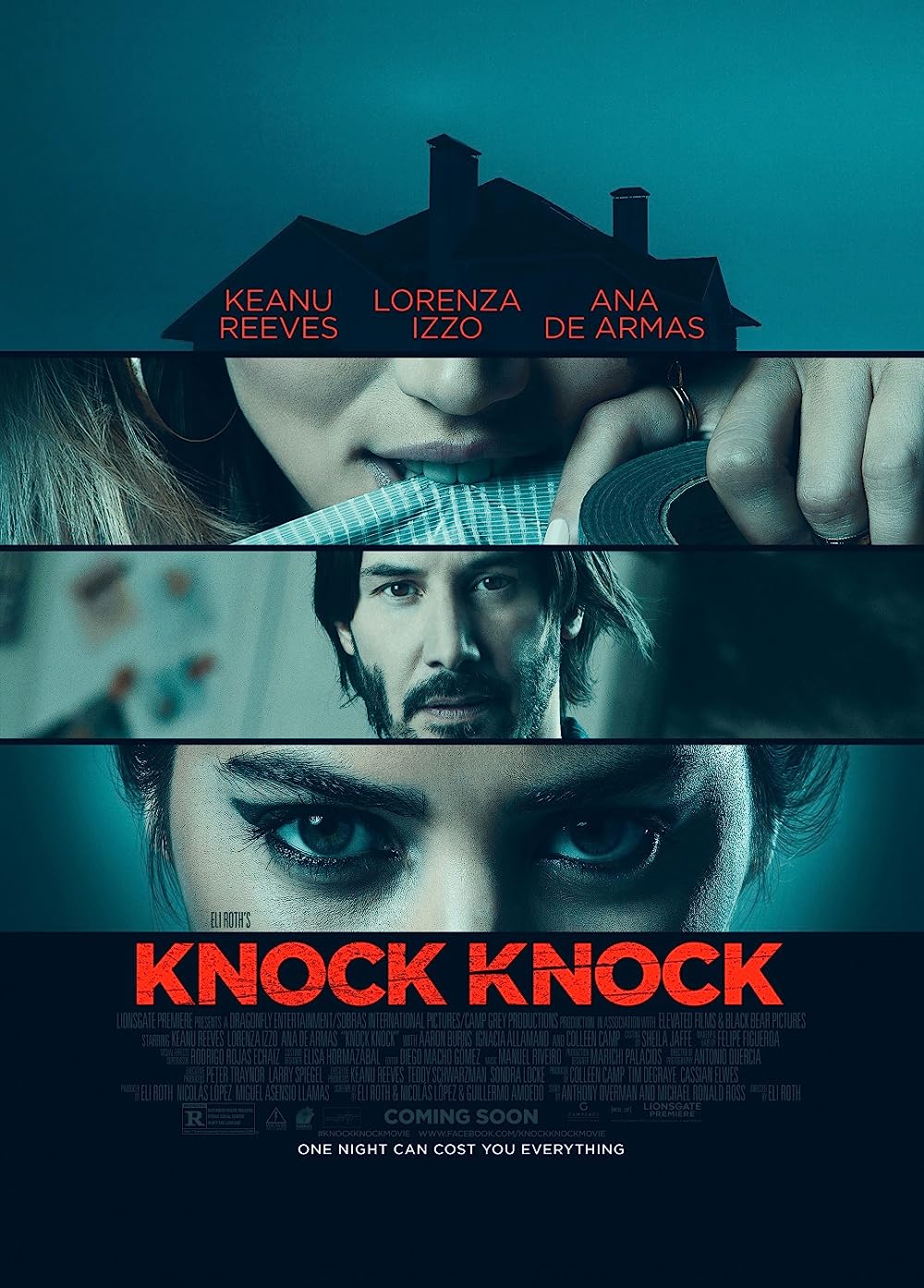 At times, "Knock Knock", Eli Roth's modern-day adaptation of the 1977 film, "Death Game", feels very satirical and humorous, making a mockery of home invasion films. At other times, the film gives off a very sickening and disturbing vibe, with Ana de Armas and Lorenza Izzo playing two crazed young women that terrorize a good father and husband. If Roth settled on one of those genres to play in instead of both, this film could have worked. But what he put out was a movie that was so odd with laughable performances and a horrible script.

Keanu Reeves plays Evan Webber, the good father and husband in question. He loves his wife and two kids, but feels tied down by the responsibilities he has. When his family leaves for the beach on Father's Day weekend, Evan stays home, citing work as the major reason he has to miss out on the beach trip. He is enjoying the relaxing time alone when two young girls knock on his door, soaked by the rainstorm that is going on that night.

Those two girls are named Bel (de Armas) and Genesis (Izzo), who are lost from trying to look for a party they were invited to. Taking pity on the two girls, Evan invites them in and orders them an Uber, allowing them to dry off and stay in some place dry to wait for the car. However, they take advantage of him, forcing him to have sex with them and taking advantage of him. Now, trying to get rid of the two girls, he finds himself engulfed in a deadly game of cat and mouse, with seemingly no way out of his mistake.

I think the most unfortunate thing about this film is the performances. Reeves and de Armas are two great actors, and they have proved that multiple times throughout their years in the industry. But, this movie contains horrible performances from both of them - laughable even. Consider the scene where Evan is tied up and forced to play a demented game show with the two girls. He lashes out, screaming about how they took advantage of him, using multiple profanities and extremely graphic descriptions of the acts they committed together. It should be a break-down of a character, which is a very emotional and hard to watch scene in other films. This scene, however, is probably the most laughable scene in the entire movie. It's so stupid and ridiculous, and it is mainly due to the script.

The lines the characters deliver in this movie are very idiotic and stoic. Much of the dialogue seems very scripted and fake, and it's hard to believe that anyone in real life would say some of the things the characters do. At the same time, the screenplay tries too hard to put the demented girls on display, leaving little to the imagination for the viewer. I felt very uncomfortable watching the scenes where Bel tries to rape Evan, calling him daddy and wanting him to "F*** her like mommy." The thing is, however, it's not a good uncomfortable feeling like you would get in other thrillers. At times, I wanted to stop watching this film due to how disturbing it was.

Then, at the same time, Roth adds in these elements of comedy, which are surprisingly much better than the thrilling aspects of it. My favorite scene of the movie is when family friend Louis (Aaron Burns) comes over to the house to take the sculpture to Evan's wife's art studio. He notices that something's wrong, and proceeds to tell the two girls that he is from Oakland, so he knows "two ghetto ass hoes" when he sees them. It's so off-the-wall and unexpected that it's hilarious.

Now, this is how Roth should have taken the whole movie. He tries to combine the satirical drama with the horror/thriller genre, and it definitely doesn't work in his case. If he wanted the movie to work, he should have stuck with one genre, and built the film around that idea. But, he tries too hard it seems like, and in turn, we get a movie that just does not work whatsoever.

The ending is very idiotic and does not give any type of closure or pay-off for the viewer. I don't know if Roth wanted the viewer to feel defeated by the movie, but that is how I felt as the credits rolled. I honestly don't know what de Armas or Reeves were thinking by signing onto this movie, but let's sincerely hope we never get a movie like this from either of them again.