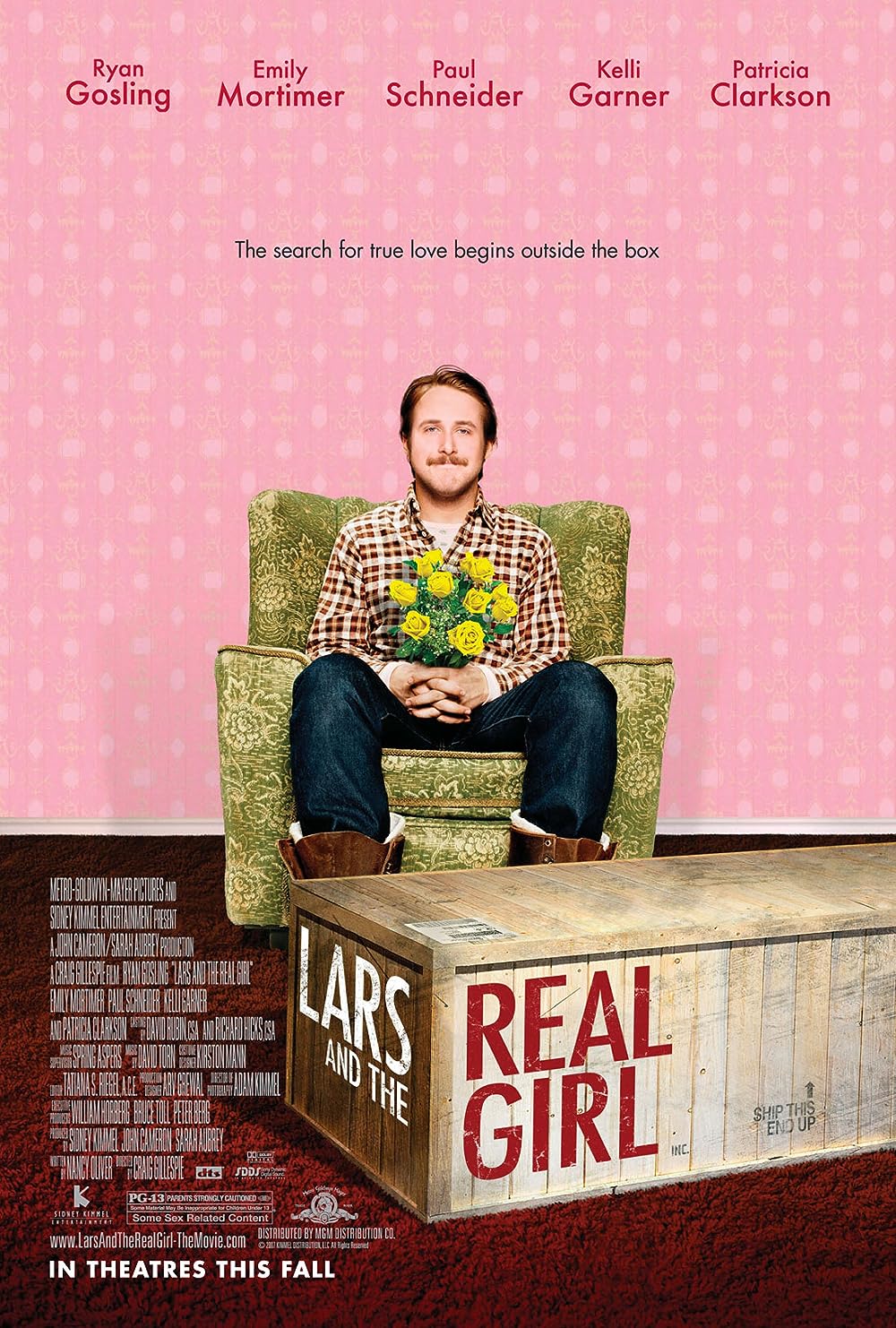 In all honesty, I wasn't sure of what to expect when I sat down to watch "Lars and the Real Girl". A film about a man who falls in love with a sex doll seems interesting, but I was expecting an odd film that possibly wouldn't work. If you have read any of my other reviews, you would know I'm a huge fan of Ryan Gosling and the movies he has been in. That was probably the driving reason why I was impelled to watch this film. But as the movie progressed, I realized this movie is full of heart and adoration for the act of accepting others as who they are.

Gosling plays Lars, who is a delusional young man who has a hard time of relating and interacting with others. His family and friends try to get him out of his house (which is the garage of his brother's house) and meet new people, especially the new employee at his work, Margo (Kelli Garner), who is smitten wit him. But, when Lars learns about buying life-size and realistic sex dolls online, he decides to purchase one.

However, Lars' objective with this doll is far from sex; he wants a full-time, meaningful romantic relationship with this doll, who he named Bianca. Instead of putting him down however, his brother, Gus (Paul Schneider) and his wife, Karin (Emily Mortimer) decide to accept Bianca into their lives, creating this false reality for Lars to help him cope with life and the abuse from his father. After they start to accept the doll at home, it influences the rest of the town to accept Bianca into their community, making her apart of life just like everyone else.

But, at the same time, if you strip away the sexual aspect of the doll, this is still an inanimate object. It's not a person or an animal or pet, but a silicon doll that has no emotions or feelings whatsoever. But the way that Gillespie was able to take this doll and make the viewer fall in love with her and want it to be happy with Lars shows that he had done his job perfectly. This serves as a driving force for how the viewer is supposed to feel throughout the runtime of this movie.

Gosling is wonderful in the titular role as well. He usually plays these charming or shy men, so it's refreshing and a change of pace to see him play a role where his character is delusional and suffers from some mental disabilities. He is a product of his environment and his upbringing, causing him to act and be the way he is. So, I think by him using that doll to understand relationships and deal with the cards he was dealt is so beautifully moving and heartfelt. That is the whole purpose of this movie, to show the growth that Lars goes through, even if it is caused by the smallest and most random thing.

This movie is basically the poster child for acceptance of others. Sure, there are of course some mean spirited people in the town that will not accept the relationship between Lars and Bianca, but they are drowned out by the loving and caring people. It shows the beautiful nature of humans and their ability to emphasize with others, which I think is much needed in society in this day and age.

This movie isn't without its flaws though. Sure, this movie is great and really hits the viewers in all the right ways, there are just some problems with the pacing in this movie. I think it lingers a little too long on some of the scenes that don't have much importance, and sometimes goes too fast through the scenes that I, as a viewer, wanted to see a little bit more of. This is mostly nit-picking at some of the pacing issues, but it is overshadowed by the beautiful message and story.

This is not Gosling's best role by a long shot, but it is perhaps the most heartfelt. This movie is created for those who need it, the ones who are struggling with some of the problems that Lars also experiences. But it is also for everyone to show how to treat others in society, no matter what. Whether you viewed this movie in theaters or will watch it decades from now, the message to treat people with kindness and compassion will always ring true.