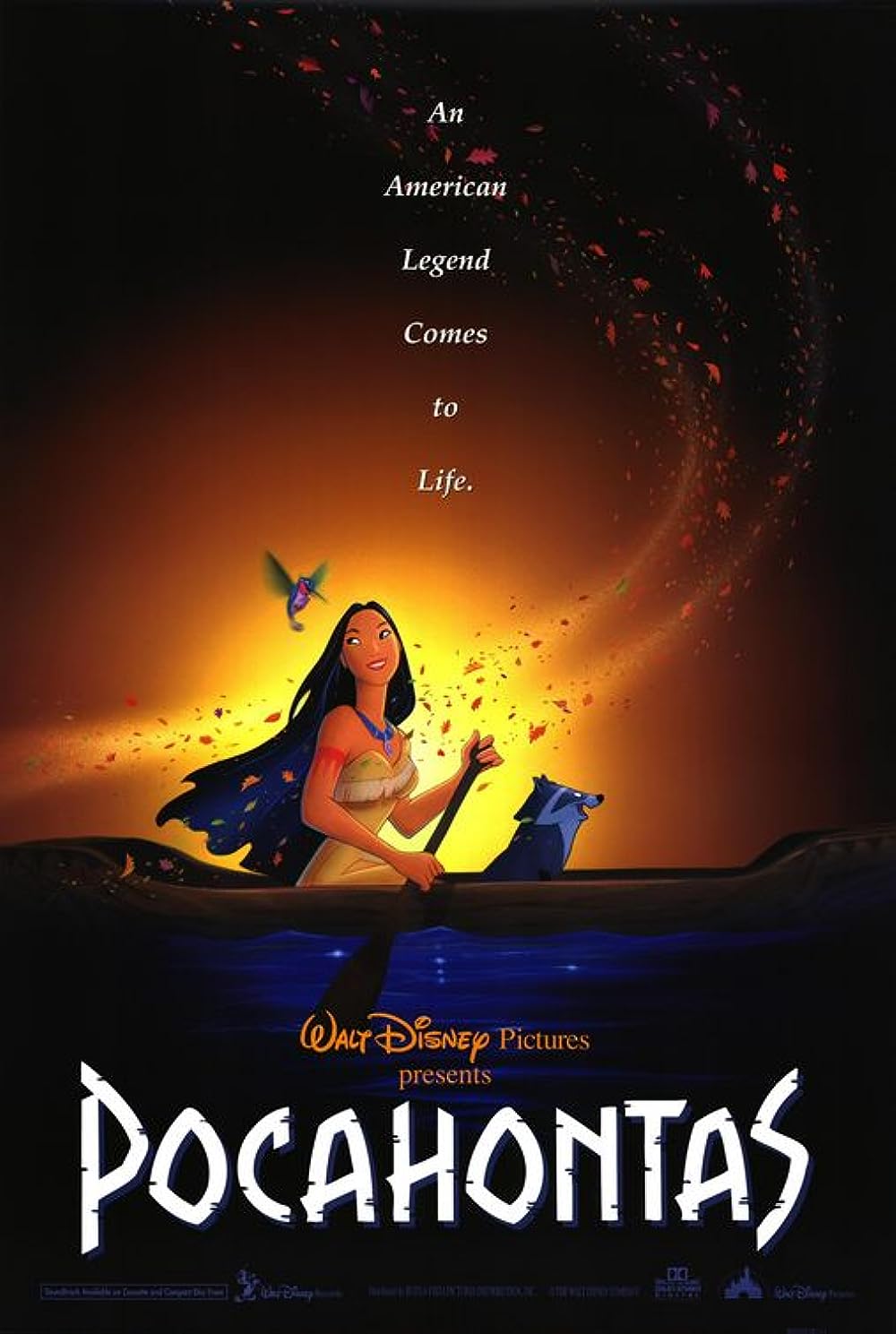 "Pocahontas" is perhaps one of the most thoughtful Disney animated films, drawing inspiration from real-life events and putting their own Disney spin on it. It's like we are exploring the history of Pocahontas through rose-colored glasses, injecting humor and heart-felt messages and subject matter into the film. However, by adding magical elements and scenes of beautiful imagery, the filmmakers create a stunning film that fits perfectly into the Disney canon of animated films.

The movie is centered around its titular protagonist (played by Irene Bedard for the speaking voice and Judy Kuhn for the singing voice) and her Native American tribe. They live in peace with the land and the animals, following the traditions of their elders and leading the tribe through survival. However, when the Europeans come into the picture, they believe they can colonize the area and convert the Native Americans to a more modern and civilized way.

However, when John Smith (Mel Gibson), who is a voyager on the European ship, meets Pocahontas, they both fall in love with one another, fascinated at their cultural differences. When their romance proves dangerous however, with the European Governor Ratliff (David Ogden Stiers) hungry for all the power and gold in the land, the two lovebirds must somehow help her tribe and his group of people figure out their differences to be able to be together.

Pocahontas is one of the most badass female protagonists in the Disney films up to that point. She breaks the traditional mold of the Disney princesses, who are usually laying around and waiting for their price to come. This character, on the other hand, takes her own future in her hands, showing how she doesn't need a prince or anyone to take care of her. Due to the fictional creation of this historical figure, it set the foundation for Disney to create other powerful Disney warrior princesses, such as Mulan, Elsa, and many others.

At the same time, I think John is a great male protagonist for a film like this. He is not entitled like the other Disney princes (even though I wouldn't consider him a prince in this sense), and actually cares about other people and their differences. Now, this is not saying the other Disney princes were shallow, but do you think the prince would have gone and danced with Sleeping Beauty if she wasn't so beautiful? John doesn't see Pocahontas as someone different than him, but rather as his equal and adores learning about her and her life on this land. Neither of them overpower the other, but rather treat each other like equal. In the case of both Pocahontas and John, they really set the bar high for the Disney princes and princesses, and influences many of the relationships found in today's Disney films.

This film is a very refreshing take on the Disney animated films. It is perhaps the most serious Disney animated film, and allows the characters to create these heartfelt connections and display these beautiful acts of kindness and acceptance. Then, with the inclusion of Ratliff and the other Europeans who cannot change their ways, with the exception of Christian Bale's Thomas, it allows them to change their ways towards the end of the film and show how humans can get along and not be judged by their differences. Now, this is a lovely and heartfelt connection from this movie to real-life events, but it is obvious that this is no where near the true story of Pocahontas. That doesn't make much of a difference since Disney usually changes up the stories for their animated films, but it is impossible to judge this movie off of the real events.

Perhaps my favorite thing in this film though is the inclusion of Meeko, Flit, and Percy. Meeko and Flit are Pocahontas' friends, with them being a raccoon and a hummingbird respectively. Percy is Ratliff's pug, who Meeko likes to tease and constantly mess with. They are hilarious throughout this film, and add the humor that is present in this movie. It's hard not to crack up when they appear on the screen, and are a great addition to this overall-serious film. The same can be said for Grandmother Willow (Linda Hunt), who is a sweet grandmother that takes the form of a tree and helps Pocahontas make decisions and guide her in the right direction. She is a wonderful, motherly figure in the film that also makes the movie both more heartfelt and comedic.

Overall, whether or not you dislike this film due to the false material they added about this character and movie, you can't deny the fact that this movie is wonderful to watch and leaves the viewer feeling satisfied with what happened to the characters and the setting. It is heartfelt and lovely to watch, and films like "Mulan" owe their success to this film for taking a risk and introducing a great and powerful female protagonist.