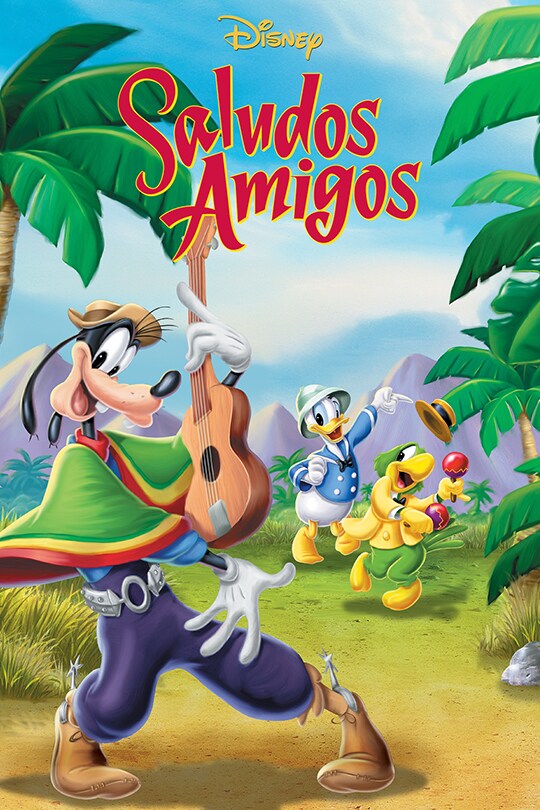 The 1940's were a rough time for the Walt Disney Animation Studios. Not only were they dealing with an animator strike, but World War II was starting, forcing the other animators to be shipped off to war. Because of this, it forced Walt Disney to start making package films, which are movies that consist of a series of short films put together. Their first attempt at this was "Saludos Amigos", a collection of shorts featuring Donald Duck and Goofy in South America.

The Walt Disney animators who are still at the studios take a tour of South America, exploring the settings around them and interacting with the villagers and citizens of these towns. Due to their journeys, they are able to craft four short animated films: "Lake Titicaca", "Pedro the Plane", El Gaucho Goofy", and "Aquarela do Brasil". These four shorts are presented with a fun soundtrack and intercut with documentary footage of the animators' travels in a different continent.

To start this review, we will look at the documentary footage, and then take a look at each different short film separately and how they apply to the film as a whole. So, for the real-life footage of the animators in South America, I think it is very well done and shows the culture and society of this different continent. The filmmakers were really able to capture everything that the animators saw, allowing them to get the inspiration for these short films that they put on screen. I think it was a good idea to show the history and the inspiration behind the short films, allowing the viewers to pick out what they saw in the documentary footage that is present in the short films. However, with that being said, I don't think it really fits into an animated Disney film. There are reasons for it to be praised and for the older audiences to enjoy these segments, but I think it really does take away from the animated shorts due to the long live-action segments that take up over half of the runtime.

For all of the short film segments, I think we can applaud the Disney animators for beautifully creating these short films and making them look great on-screen, even during the problems the studio was having at the time. Looking at the first short, "Lake Titicaca" with Donald Duck, I think it is a mediocre short, and doesn't really contain anything special. It honestly becomes a little dull after a while, but is enjoyable to watch for the most part. It reminds me of the classic Goofy shorts, where he is constantly getting himself in trouble or in schemes that don't work out for him (more on that later). But this is probably the weakest short in the entire film, which I don't think was a good idea for the movie to begin with.

Personally, I love everything about the "Pedro the Plane" short. It is about a young plane who is still in school and learning how to fly. But, when his parents fall ill, he must brave the harsh climate and terrifying aspects of the world to go and fetch the mail for his parents. It seems like a kind of dull and stupid plot, but the filmmakers were able to craft this beautifully animated and fun short. Pedro is one of those characters that melts your heart when you see him on-screen, and the viewer wants him to succeed in his brave little quest. It's nothing big or bold, but rather just a delightful and fun little adventure about a little plane that anyone can enjoy.

Like mentioned earlier, Disney released shorts about Goofy, which depict him going on these crazy and wacky adventures that usually end up with him in hot water, and "El Gaucho Goofy" is no exception. They take cowboy Goofy out of America, and place him in South America as a Gaucho, which is their form of cowboy. We basically watch his adventures and his clumsiness for the next few minutes as he tries to learn the ways of the native Gaucho. There isn't really anything special or new about this short, but is just a lot of fun for the viewers to watch for a few minutes.

The final, and best, short of the film is "Aquarela do Brasil", where they introduce a new character known as José Carioca from Rio de Janero. The short shows him interacting with Donald Duck, and he takes him to Rio to learn the ways of the Samba. Him and Donald get drunk off of cachaça, and Donald fully embraces the ways of the Samba, dancing his way through the tunes of "Aquarela do Brasil" and "Tico-Tico no Fubá". This is the best short of the film simply on the animation aspect alone. They use a watercolor format to animate this short, and it is so beautiful and wonderful to watch. Then, at the same time, the interactions between José and Donald are amazing and so much fun to watch. This outshines all of the other shorts, and makes the saying true that you should leave the best for last.

Overall, I would't say this 40-minute film is as good as many of the other movies in the Disney animation canon, but for what they had and what they were going through at the time, it is very impressive Disney was able to pull off a film like this. I think this just shows how great of a studio Walt Disney Animation is by putting out a decent film when going through all this hardship when other studios would have rushed out as many bad films as they can to keep in business. If anyone wants to doubt the talent and the dedication of Walt Disney again, simply show them this movie and tell them the backstory, and they shouldn't make that same mistake twice.