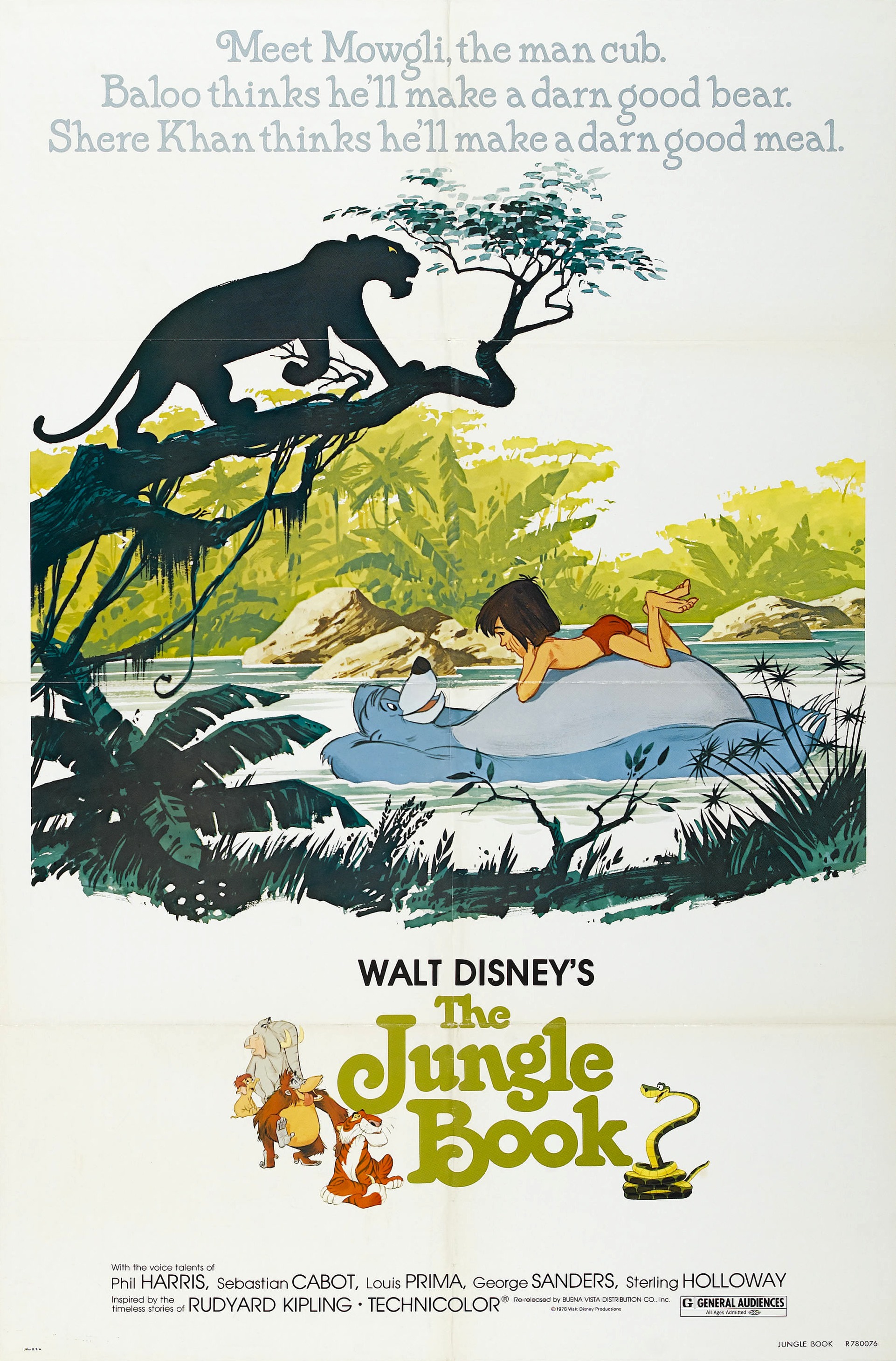 There are some Disney songs that are nearly impossible to think of whenever Disney music is brought into a conversation. You have "When You Wish Upon a Star" from "Pinocchio", "A Dream Is a Wish Your Heart Makes" from "Cinderella", and a few others that are a staple of the classic Disney Animated feature films. Along that list are two songs from their 1967 film, "The Jungle Book": "The Bare Necessities" and "I Wan'na Be Like You", two fun and memorable songs that can help sum up the vibe and tone from this classic film based off of Rudyard Kipling's collection of short stories.

The movie is centered around a young boy named Mowgli (Bruce Reitherman), who is a "man-cub". He was found as an infant by Bagheera the Panther (Sebastian Cabot), who then brought the baby to a family of panthers to look after. They do so successfully for ten years, raising the young boy as one of their own. However, when there are alerts of Shere Khan the Tiger (George Sanders) prowling around the forest, they must send the boy to live in a human village as Shere Khan will kill him if he gets his hands on him.

Bagheera volunteers to escort the boy to the village, since he already has a personal connection with the boy after saving him. Along the way, they encounter a group of elephants that resemble a battalion, a manipulative snake named Kaa (Sterling Holloway), a group of singing vultures that represent the Beatles, an ape king named Louie (Louis Prima), and a lovable bear named Baloo (Phil Harris). With half of this cast of characters trying to help Bagheera and the other half wanting to eat or use Mowgli for their own personal gain, it is up to Bagheera to keep the boy safe, no matter the cost.

The plot is quick, light, and a lot of fun. The whole movie kind of seems episodic in a way, similar to the style of Disney's earlier film, "Alice in Wonderland". There is a main overlying storyline that progresses throughout this movie, but little events and new characters are sprinkled throughout the entire runtime. For example, Kaa the Snake would represent the Cheshire Cat and Baloo would likely represent the Mad Hatter in this case.

However, in this movie, I would say the characters are more fun and likable, compared to the characters in the aforementioned film. They are fun to watch, and inject humor and energy into every scene they are in, especially Baloo. He seems like this real lazy bear, but he is so much fun to watch that his laziness is enjoyable and entertaining, believe it or not. At the same time, the filmmakers create these interactions between these characters that are very charming and lighthearted. Consider the scene where Mowgli joins the elephants that are marching, interacting with the baby elephant that is in the back of the line. We get a three or four minute scene that is literally them interacting and Mowgli attempting to be an elephant. It doesn't further the plot along or have real specific plot development, but rather the filmmakers knowing when to place this scene in the film at the correct pace and timing.

My personal favorite thing about this entire movie are the songs and musical numbers present. As mentioned earlier, "I Wan'na Be Like You" and "The Bare Necessities" are absolute classics, and definitely the best musical moments of this movie for different reasons. The song sung by King Louie is so energetic and has the viewers resisting the urge to jump out of their seats to dance and sing along with the singing monkey. On the other side of the coin, Baloo's number is so laid back and, perhaps, lazy is the best word to describe it. It's very relaxing and soothing, which is a great introduction to this famous bear. Both songs reflect each character's personality, and show who they are as characters. It's like their introduction to this movie in a way. And of course I can't forget to mention the vultures' song, which is reminiscent of a Beatles song of that day and age.

This Disney adaptation of the book may not be as faithful to Kipling's stories as some other adaptations of it may be, but this is definitely the most fun and energetic. Disney Studios always have a way of putting their own unique styling on things, and this movie is no exception. This is oozing the Disney charm and charisma, and all in all, another fantastic addition to their already impressive catalog of films from the years before it.