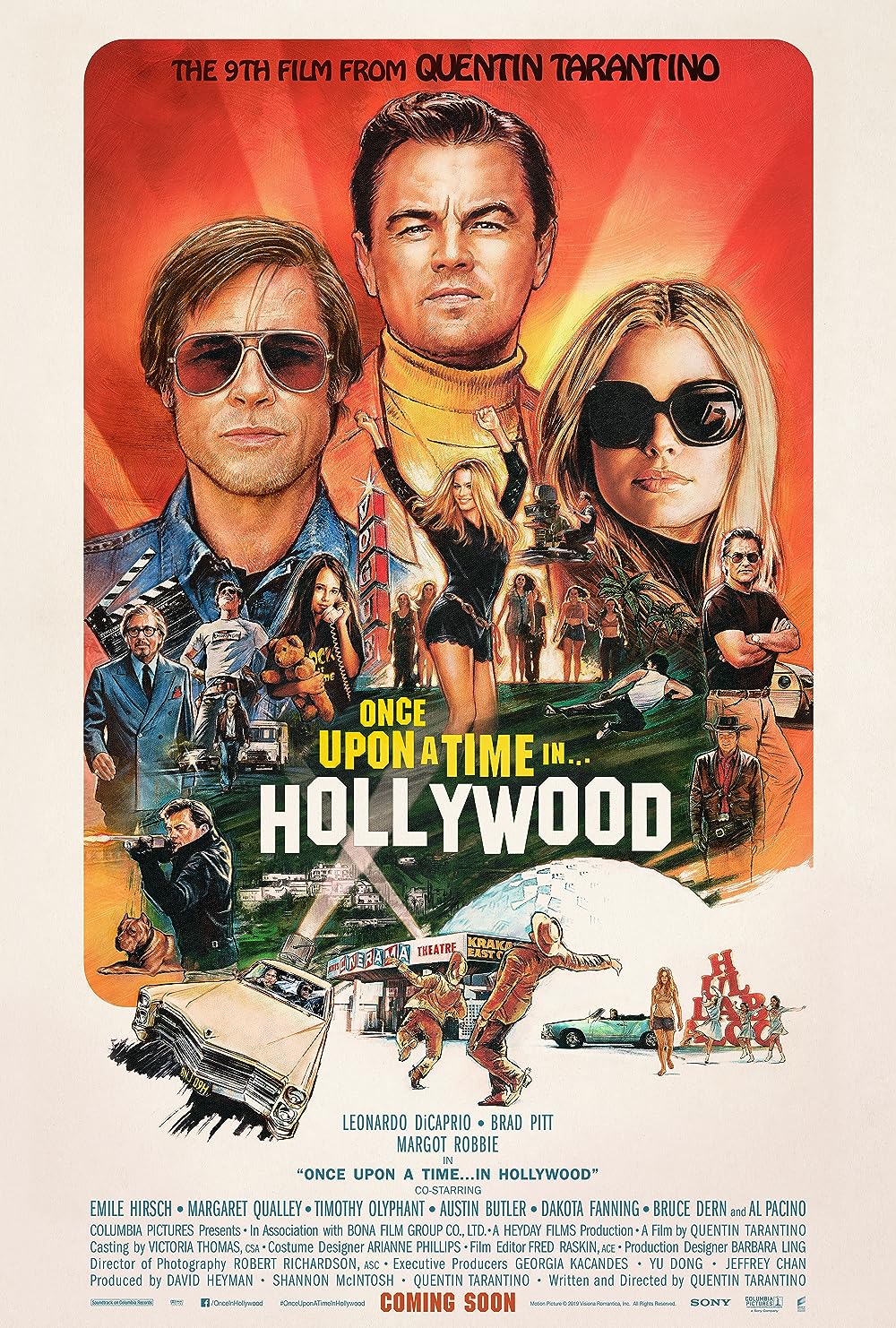 "Once Upon A Time in Hollywood" Film Review

Some people consider "Once Upon a Time in Hollywood" to be a masterpiece from Quentin Tarantino, and some consider it to be a misfire from him on many different aspects. For me, personally, I fall into the first category, and I consider this movie to be tied with "Pulp Fiction" for my favorite film of all time. Like his previous films before this one, Tarantino relies on nostalgia, over-the-top violence, and that beautiful Tarantino dialogue to move the film along, showcasing a day in the life of a washed-up actor and his stuntman in the ever-changing 1969 Hollywood.

The actor and stuntman in question is Rick Dalton (Leonardo DiCaprio) and Cliff Booth (Brad Pitt), respectively. They both worked on the famous western TV show, "Bounty Law", before it was cancelled due to Dalton wanting to have, what he calls, a "risky-dinky movie career". He starred in a couple of good films that didn't do the best, forcing him to start playing the Heavy in TV pilots to make the star of that television program look better than the great Jake Cahill from "Bounty Law".

He has a proposition though from Marvin Schwarz (Al Pacino), who is a casting agent who wants to make Rick a big star again - go to Rome and star in Spaghetti Westerns. Rick, for some reason, absolutely loathes the idea of starring in these films, thinking they're a farce of the American western films he is used to. He struggles with what choice he is making, while also getting ready to shoot the pilot for "Lancer", which proves much more challenging for him than he was expecting.

Cliff, on the other hand, has a hard time getting hired to be Rick's stunt double anymore. His past is shrouded in mystery and speculation, with people believing he killed his wife and got away with it. Because of that, he goes around Hollywood and runs errands for Cliff, such as fixing the antenna on his roof or house sitting for him while he's gone. However, the day that Rick goes and shoots the pilot, he encounters a young Hippie girl named Pussycat (Margaret Qualley), who has ties to the infamous Manson Family. When Cliff decides to go and check it out, he realizes how dangerous and shady the family is.

This movie honestly reminds me a lot of "Pulp Fiction" in the way that there are numerous characters to follow, and it doesn't really rely on a central plot for the movie to progress. The viewer is basically following along as we watch our characters go throughout their day, doing their daily activities like they normally would. This is Tarantino's love letter to the old age of Hollywood, and you can definitely tell throughout how much this filmmaker appreciates and loves the craft of filmmaking.

I think Rick and Cliff serve as perfect foils for one another. Rick is very self-conscious, and he isn't as confident as his stuntman buddy is. He doesn't think he is worth anything unless he is praised by the crowds and the fans. Because of that, it forces him to do roles he doesn't want to do, and it makes him depressed that he is not where he once was. Cliff, on the other hand, rolls with the punches. He doesn't really let anything get him down, and he is confident and is just happy to be working with his friend. While Rick lives in a big Hollywood Hills home, Cliff lives in a trailer on the property of a drive-in theater. They live two separate lives and are two completely separate people who are brought together by circumstance, turning them into each other's best friends. It's beautiful honestly, seeing their friendship play out on the screen.

I think the back and forth from seeing Rick's day to Cliff's is done perfectly well. They are very intriguing and great to watch in their own ways, with Cliff having flashbacks of being Bruce Lee (Mike Moh) in a fight to his journey to Spahn Ranch with Pussycat to meet the rest of the Family. Then, we watch as Rick is dealing with his alcoholism, which forces him to forget his lines and have a mental breakdown while shooting. It shows how different each of them are, and how their interactions and their role in society makes them who they are.

DiCaprio and Pitt give some of the best performances in their career, in my opinion. Especially Pitt, who won an Academy Award for his work on this film. Cliff is hands down my favorite Tarantino character in his filmography, and Pitt just totally embodies the character. My favorite scene of the entire movie is perhaps my favorite ending in cinematic history, which Pitt just perfectly makes his own. But, we'll get to that in a bit.

Tarantino also adds in the beautiful Sharon Tate (Margot Robbie) to the mix, who suffered a tragic fate at the hands of the Manson Family in real life. Robbie practically oozes all the charm and charisma that Tate had, which is present in the numerous photographs and the films of the real life starlet. I think Tarantino really gives Tate a beautiful story and send-off at the end, and he really takes care in crafting her character respectfully.

Now, that end I mentioned earlier, is perfect. It simply contains everything I would ever want from Tarantino in a film like this, and it's hard not to cheer and feel a sense of euphoria when watching it. I won't spoil it, but I applaud Pitt, DiCaprio, Austin Butler, Madisen Beaty, and Mikey Madison for giving fantastic performances through this 20-minute climax and making this ending what it is. Per Tarantino fashion, he decides to rewrite history in his own way, and it turns it into a bittersweet send off for all of these characters we have followed for the past three hours.

I may be biased in saying this is Tarantino's best as it is my favorite film of all time, but it's hard not to fall in love with this movie. I remember the first time I saw this film, and it changed my life by showing me what more there is to cinema and inspired me to pursue a career in the film industry. I am forever thankful for Tarantino and this film for changing my life, and if you haven't seen it yet, I strongly implore you to go check it out. Trust me, you won't be disappointed.