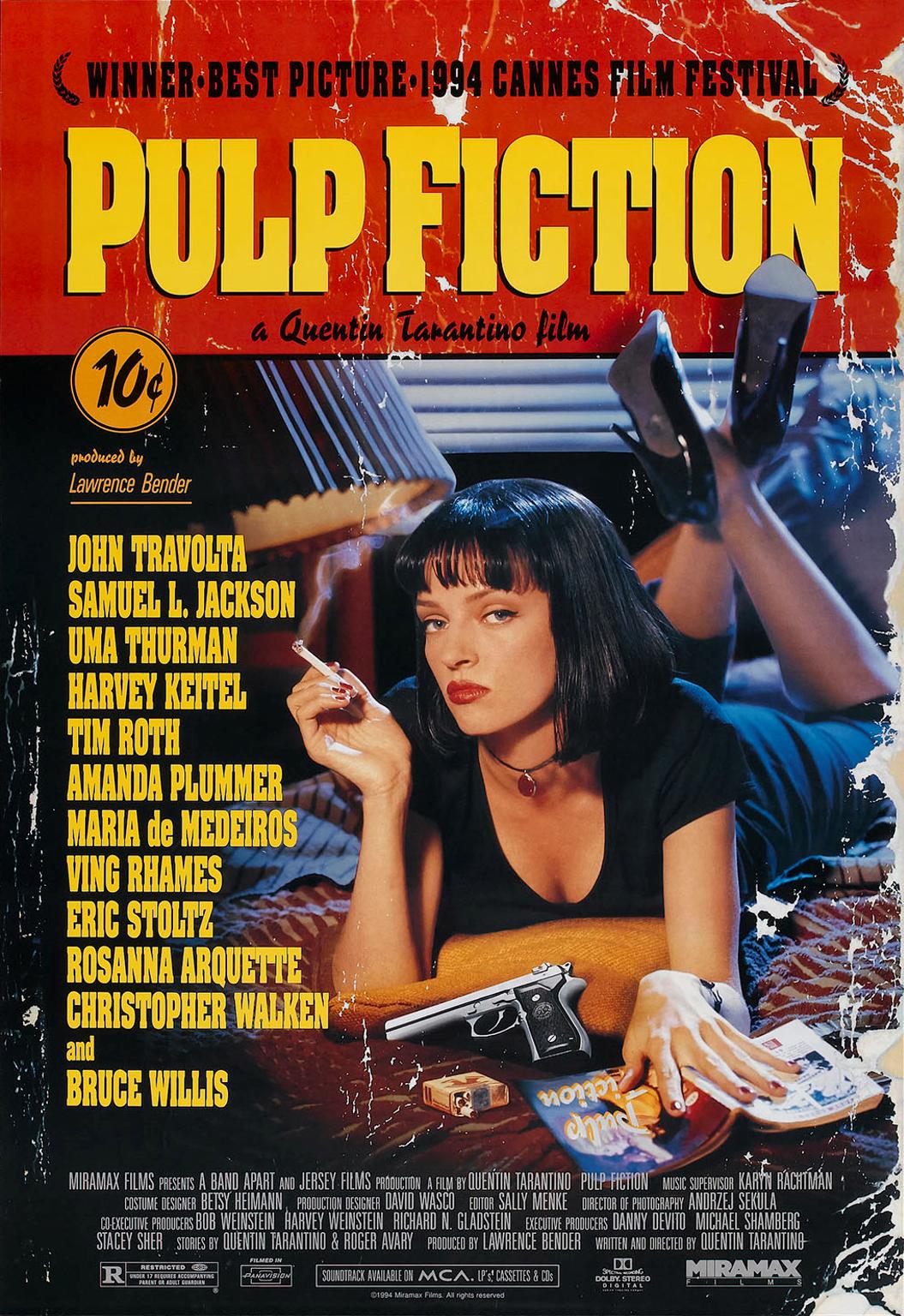 To start this review, I'll just put this out there - "Pulp Fiction" is one of my two all-time favorite films, and is the reason I do all of this. When I first saw this film a few years ago, it absolutely blew my mind and opened the door to exploring cinema as a whole. In a way, this movie totally changed my perspective on film and made me realize how important and crucial this art form is in the world. While this is only Quentin Tarantino's second film, he shows his mastery of the art form and delivers one of the best films ever made in cinematic history.

The film is broken into three different parts essentially. The first act of the movie revolves around Vincent Vega (John Travolta) and Jules Winnfield (Samuel L. Jackson), who are two for-hire hitmen that are tasked with receiving a briefcase for their boss, Marsellus Wallace (Ving Rhames). They succeed in getting the case back, but unfortunately have to deal with a casualty who is accidentally killed while on the job. This forces them to go to Jules' friend, Jimmy's (Tarantino), house to try and clean up their mess.

The second act consists of Vincent having to take Marsellus' wife, Mia (Uma Thurman), out on a day while the mob boss is out of town. Everything goes well between the two, and there may even be some sexual tension between the two. When an unsuspecting circumstance leaves Mia clinging to life and Vincent now trying to save her to save his own life, he must recruit the help of some of his druggy friends without Marsellus finding out.

The third act deals with a new character, a boxer named Butch (Bruce Willis), who made a deal with Marsellus concerning a boxing match. When Bruce breaks their deal, he is now on the run from Marsellus and his henchman, causing him to break into his house and try to escape with his girlfriend, Fabienne (Maria de Medeiros). However, when a chance encounter with Marsellus forces Butch to face his foe, they end up in a terrifying situation which will cause Butch to do things he don't want to do to survive.

All of these events take place one after another, but they all are linked to one another. All of these characters are in their respective circumstance because of another character in the movie. Yet, Tarantino arranges these events out of order, with characters that have died in pervious scenes in the movie coming back for events that take place after. Because of this, the viewer has to place these events in chronological order for themselves; I honestly think this enhances the viewing of this film and just makes this movie a thousand times better. It seems more like a collage of events, rather than a film telling a complete story, which I honestly do like a lot. Tarantino does this again, in a way, with his 2019 film, "Once Upon a Time in Hollywood", which isn't necessarily plot driven as well but serves as more of a mood and vibe for the time period and setting.

I think all of the performances in this film are amazing and spot-on. Every actor does a great job of embodying the character they are playing, especially Travolta, Jackson, and Thurman. This film made Jackson and Thurman stars, as well as reviving Travolta's career after a series of bad roles and choices. Tarantino took the potential and greatness of each of these actors' and fully uses it to his advantage in this film. I honestly couldn't imagine any better actors playing these roles, and I'm glad Tarantino casted who he did.

When thinking of "Pulp Fiction", a lot of people think of the overtly graphic sexual content, violence, drug use, or the excessive use of profanity at first. These factors are perhaps as famous as the characters and the story itself. No one had seen a film like this back in 1994, shocking and disgusting many audience members. However, Tarantino was able to break down walls and barriers to have this film made, and he instantly changed the landscape of cinema forever. It's simply beautiful how he was able to make this film he envisioned a reality.

I think perhaps the best thing about this movie is the writing from Tarantino and Roger Avary. They are able to craft these witty and humorously dark scenes that have perhaps the best dialogue in film. These characters really bring the viewers into the film and make them feel like they are having a conversation right along with them. It's very hard to achieve this in many other films, but Tarantino was able to perfectly and effortlessly deliver on this.

"Pulp Fiction" is hands down in my list of the top 3 best movies ever made, and I honestly don't know I that will ever change. Tarantino was just able to take all of these factors and combine them together to deliver a masterpiece of a film. Everything about it is so beautiful and crazy, and I honestly am so grateful for a filmmaker like Tarantino to exist in this business.