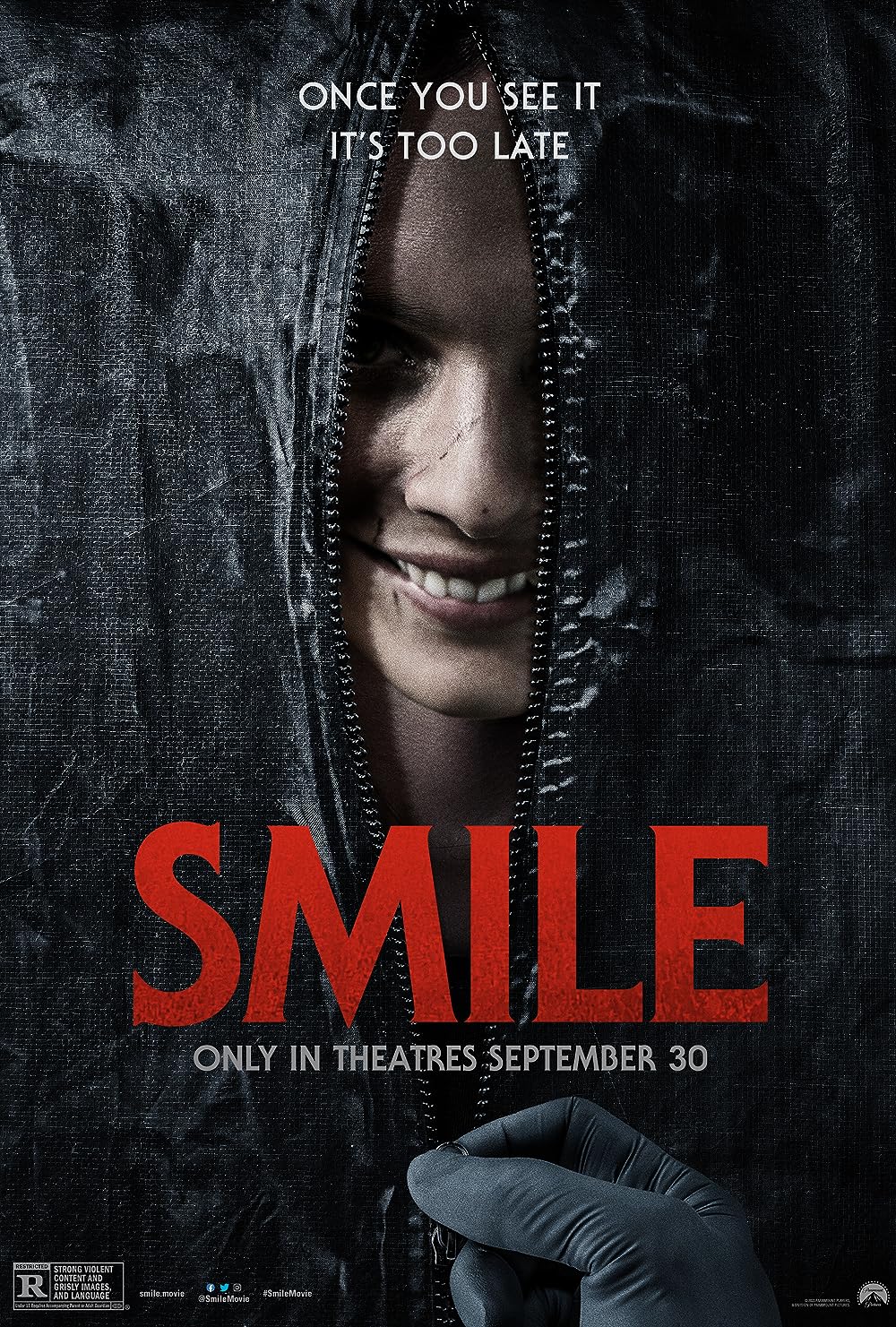 Leading up to the release of Parker Finn's feature length directorial debut, "Smile", Paramount seemed to spare no expense to advertise their newest horror film. They played the trailer in front of almost every movie in theaters, made multiple TikTok videos of people bearing creepy smiles at the camera, and even hiring actors to go to professional sports games to sit in front of the camera and wear that creepy smile the entire game. It seemed like no one could escape this new horror film, and it seems like Paramount had a lot of faith in this new film. I unfortunately did not have a chance to catch this movie in theaters, but I heard from numerous people that this movie is very good and has a crazy ending. So, when I turned it on on Paramount+, I was expecting a horror movie that will blow my mind and do something I had never seen before. For what it is, I appreciate Finn's hard work and think it does a pretty good job, but that doesn't mean I don't have my problems with it.

If you have been living under a rock and never saw the multiple trailers and TV spots for this movie, it follows a therapist named Rose Cotter (Sosie Bacon), who is traumatized after the suicide of her mother at a young age. She tries to deal with her own trauma by helping others, as she works 80 hour a week shifts at the hospital. However, she encounters Laura Weaver (Caitlin Stasey) one day, who comes to the hospital claiming that people keep giving her creepy smiles, especially her grandfather, who died in front of her many years earlier. She said this demonic entity is telling her things and is worried she is going to die. When they are talking, Laura is suddenly terrified, jumping out of her chair and making choking sounds. Rose goes to the phone to call for backup, but when she turns around, Laura is smiling creepily at her, and proceeds to stab herself in the face before slitting her own throat.

Now obviously, this would traumatize anyone. I mean, it traumatized me a tad just watching it on the screen. But for Laura, she is now having to face that she has seen two suicides, both she could have prevented. As she tries to recover from what happened, she starts to see hallucinations of the young woman who killed herself, while also hearing voices from a demonic voice that she is going to die soon. She asks her ex-boyfriend, a police officer named Joel, to help her find out what is going on before it is way too late for her.

The best thing about this movie is the horror aspect of it all. Many modern horror movies have a hard time really trying to capture the creepiness and sickening factor to their movies, but Finn does it perfectly. Just watch the opening scene and you'll know what I'm talking about. There is something about the creepy smiles of the victims that make the viewer's stomach churn and give them a not-so-good feeling about what they are watching. Every scene of this movie is able to keep the viewer on the edge of their seats, while also terrifying them about what's going to happen next.

Another thing I would want to point out that the film does very well is pacing the story correctly, and not making the story feel like it drags after a while or run out of steam. Every second of this movie is suspenseful and exciting, allowing the viewer to really engage in what they are watching. Whether it is seeing the gruesome murders or trying to figure out what is going on with all of the suicide victims, Finn crafts this story in a way that it is able to be a good modern horror movie.

Now here's the biggest problem of it all - the main character is very unlikable. She doesn't really possess any redeeming qualities about her, and she seems like a demented person who is trying to make others feel as sick and depressed as her. She is perhaps one of the most incompetent therapists on screen, and Finn doesn't really give the viewer any real reason for us to like her. Personally, I didn't care if she lived or died at the end, and that is not a good thing for the viewer to feel when watching a movie like this.

If he had focused more time on the character development of this movie, I think he could have crafted some very good characters. It is obvious Finn has the ability to craft very good characters, but it seems like he plays it way too safe with this one, which really shows in the final product of this film. We don't really care about any of the other side characters as well, and they kinda just disappear from the film when we reach the second half. Sure, Finn is able to craft some fantastic horror elements, but he showed that he hasn't mastered the actual character developments and arc that are needed for a film.

Many of my friends and other people I have talked to have constantly said about how good the ending is. They said it was unexpected and crazy, which I can see - if they have never seen Gore Verbinski's "The Ring". If you loved the ending for this movie, then that's great, and I don't want to diminish your enjoyment or appreciation for what they did. But it irks me how Finn used many of the same plot points and story from Verbinski's film in his own, including the ending. I would say the final thirty minutes easily reflected the ending of the aforementioned movie, so that is why I wasn't shocked or felt like the ending was anything special since one filmmaker did that twenty years prior.

There is no doubt that I can appreciate everything Finn tried to do, and I appreciate the actors for trying in this film, but it doesn't work in some very important aspects. As a popcorn flick, it is definitely a great film and worth checking out with your friends or family for the shock value. But as an actual cinematic piece of work, it doesn't really hit that mark for me. But, maybe that isn't what it was going for. Maybe it was going for a film that will strictly entertain and scare audiences. In the terms of the movie, I think I'm OK with that.