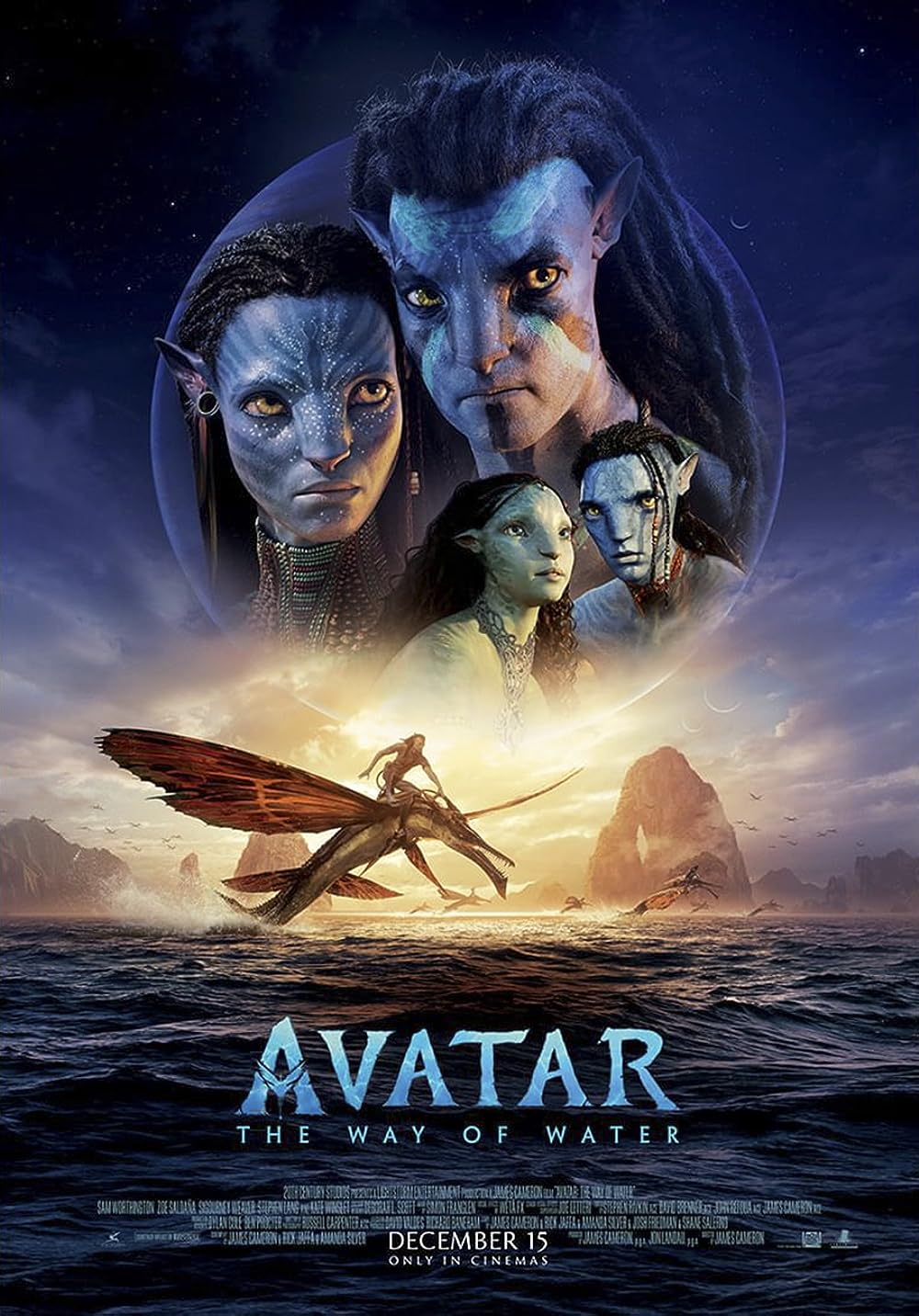 It has been 13 years since "Avatar" was released, immersing the viewers into the world of Pandora. Ever since then, it has reached the top spot on the list of highest grossing films of all time, received its own land at Disney's Animal Kingdom theme park in Florida, and has been greenlit for multiple sequels from James Cameron. Cameron has gone on to tease these new films for years, but kept having the estimated release dates pushed back. It seemed like we would never get the sequel to this huge film, until they released the first trailer and promised a December 2022 release date. With the 13 years that Cameron was given, there would be no excuse for this film to not be better than the first one, and while I do think it is better than its predecessor and has some of the most beautiful and breathtaking visuals and CGI in film history, it lacks in the story department and doesn't really give a compelling story or lovable characters.

The film open up over ten years after the events of the first movie, with Jake Sully (Sam Worthington) in his true Na'vi form, narrating how he has left the world of humanity behind and is immersing himself in the world of Pandora with the love of his life, Neytiri (Zoe Saldaña), by his side. They have started a family, which includes their sons Neteyam (Jamie Flatters) and Lo'ak (Britain Dalton), their daughter Tuk (Trinity Jo-Li Bliss), and their adopted daughter Kiri (Sigourney Weaver, who also plays the deceased Grace in flashbacks), who was born from Grace Augustine's Avatar mysteriously. Among their children is a human child, called Spider (Jack Champion), that was left in the scientists' care after the other humans departed at the end of the first film. Everything seems perfect in their life since the humans have left, which is then interrupted by a mysterious spacecraft leading a horde of spacecrafts to the world of Pandora.

These spacecrafts harbor Avatars of the villains from the first film, led by the despicable Col. Quaritch (Stephen Lang). He is angry over his death from the first film, and is now wanting revenge against Jake and his family. When he starts attacks on the Na'vi people in the jungle, it forces Jake and his family to leave their home and journey far to the home of the shore tribe known as the Metkayina. They learn how to adapt to their ways, while Quaritch and his men will stop at nothing to destroy Jake and his family, as well as anyone who comes in their way.

The first thing I want to mention is that this film is absolutely gorgeous. Cameron and his team have really outdone themselves with this film, and many of the shots are so beautifully done and have purpose in every scene. They were able to create this huge world in the first movie, and this films allows them to explore many things we weren't able to see in the predecessor. To be able to immerse the audience into this world, they had to practically expand this world around the viewer in their seat at the cinema, which they perfectly did in every second of this movie. I highly recommend for you to check this movie out in 3D on the biggest screen possible as I don't think you will feel the same effect from watching it in 2D.

Numerous sequels have been announced for this franchise, so it seems like Cameron was more focused on the world building of this movie rather than the story. Now, that's both a good and bad thing. On the good aspect, it allows us to watch these characters explore and interact with the world around them, which  I honestly really enjoyed. The second hour of this film seemed like it was solely dedicated to exploring the surface tribe the main characters have moved to, and how they are able to adapt to the new environment around them. Many people will not like this part of the movie, but I absolutely loved it. I wasn't bored nor was I hoping they would move on to the story of this movie.

In addition to the real lack of story, he doesn't really give us any compelling reason to like or care about our characters. He makes Jake into a real douchebag, blinded by his hatred of the humans to actually care for his family. He is such a hard-ass on his children and doesn't show them any love whatsoever to "protect them", yet I can't count how many times his kids get kidnapped or lost because he wasn't paying attention to them. The only real reasonable character in this movie was Saldaña's character, and even then, she is not graced with enough screen time. The movie does focus on their children for more than half of this movie, and you do grow attached to two of them. Yet, when something major happened to one of them towards the end of the movie, the viewer honestly doesn't care or feel attached enough to have an emotional response to that scenario.

The final hour of this film is a major battle sequence that is perhaps one of the best ending battle sequences of the past decade. It is absolutely beautiful and so in your face, allowing the beautiful effects and CGI take hold of the viewer's attention for the conclusion of the film. If Cameron was lacking in the story department for this movie, I say he definitely makes up for most of it with this epic conclusion. I sat in amazement while watching this entire hour-long battle unfold in the beauty of 3D, and I wouldn't have wanted the film to conclude in any other way.

If you absolutely loved the first movie, you're going to adore this movie and can't wait for the third film that will hopefully come out sooner than this one did. However, this movie is not for everyone, and even though Cameron thinks he made a full fledge masterpiece here, he truly didn't and you need to know that before going to see this. Everyone's expectations were so high for this movie, which is very justifiable, but he just manages to miss those expectations, and it will leave many viewers disappointed. If you go into this movie with your expectations lowered and just expecting a visually stunning film, you're going to absolutely love this movie. However, it begs the question of should we have to lower our expectations to like a movie?