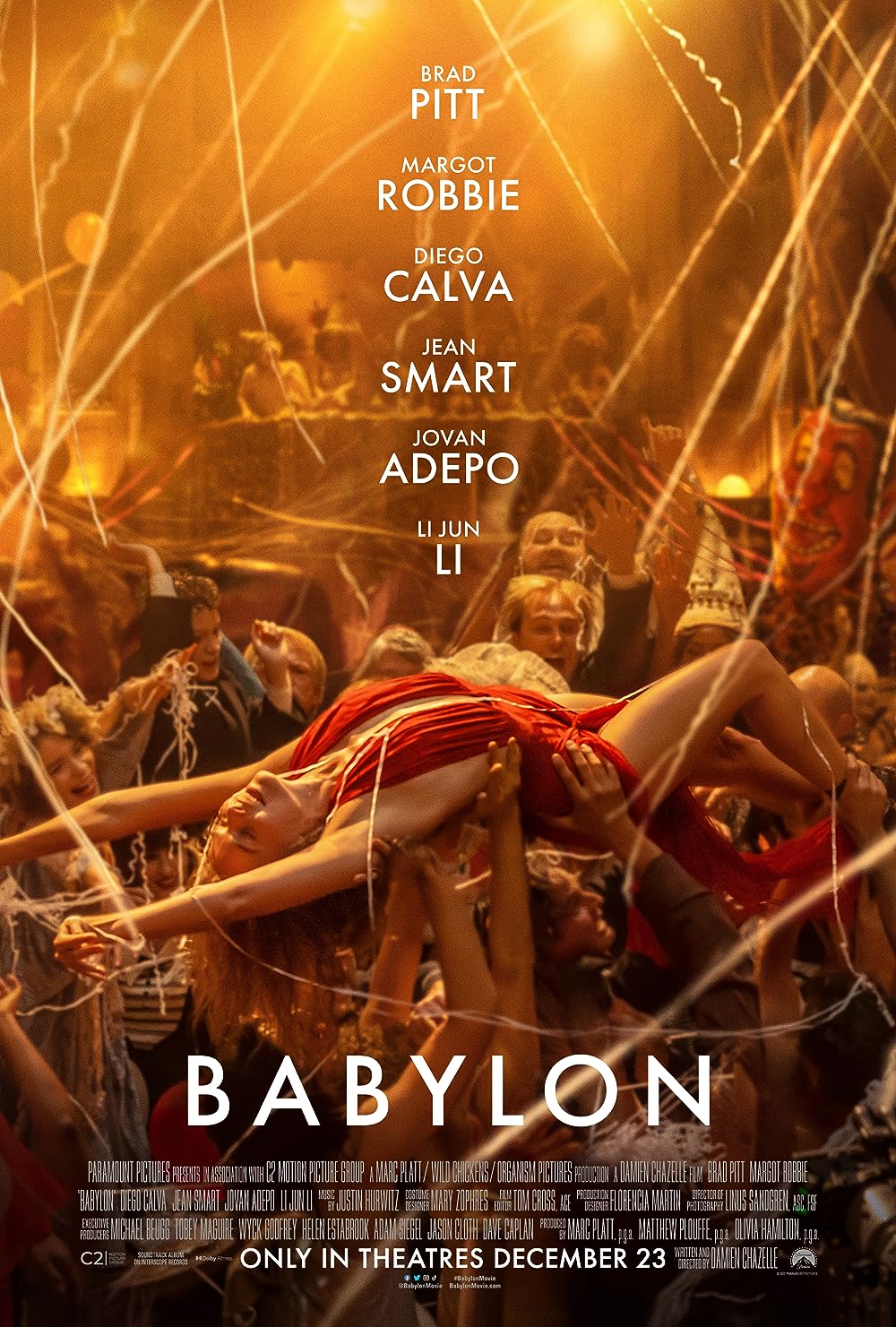 Damien Chazelle's fourth studio film, "Babylon", is unlike anything you have ever seen before. It is perhaps one of the craziest movies I have ever seen, but is also absolutely perfect in my opinion. From the casting to the story to the replication of the time period, Chazelle was able to take 1920s-1930s Hollywood and seamlessly bring it to the screen, delivering a movie that is not only a love letter to the art of film, but a roaring good time that the whole audience will enjoy.

The movie opens on a couple of men hiring a driver to transport an elephant to a huge Hollywood Hills party that is taking place One of those men is Manny (Diego Calva), who would do anything to get onto a movie set. It is his dream to be able to make the pictures that inspired him to want to get into this business.  They are able to successfully transport the elephant (with a few complications however) to the party, which contains men and women engaged in sexual intercourse on the dance floor, almost everyone in various states of undressed, cocaine and alcohol being consumed everywhere you look, and so much more. Basically everything you would imagine when you think of a Hollywood party of this magnitude during this time period.

That is when Manny meets Nellie LaRoy (Margot Robbie), a down on her luck actress who is trying to find her big break in the film business. When Manny covers for her and pretends that she is a huge star to get her into the party, chaos ensues as the elephant is released and everyone eventually blacks out from the drinking and drug abuse that happened throughout the whole night. By some freak chance, Nellie is offered a job on a movie set, which she absolutely nails and catapults her into superstar status.

Manny, on the other hand, finds himself driving famous actor Jack Conrad (Brad Pitt) home, after he has indulged in one too many drinks. However, this chance encounter between him and the actor leads Manny into working as Conrad's assistant on the movie that he is shooting, giving Manny his break through into the industry. These are only some of the major characters in the film that give a glimpse into what it is like in late 1920s Hollywood; some of the other key players include cabaret performer Fay Zhu (Li Jun Li) and African American trumpet player Sidney Palmer (Jovan Adepo).

This film is constantly moving and putting events into motion right as the Paramount logo appears before the movie. There is no break or slowing down, but shows the constant progression of Hollywood and how everything is constantly moving at a breakneck speed. Because of this, it is able to tell so many stories at once, and shows this setting through the eyes of a White actress, a Mexican Immigrant, a Chinese-American cabaret performer, and an African-American musician, to name a few. It show the hardships and the success each of them have, and how they have each contributed to a specific part of history in Hollywood.

I truly believe Chazelle is a genius, as this is just another masterpiece in his filmography. I have cited "La La Land" as being his best film, but there may be a possible chance that this film will change my view on that. From the screenplay to the direction of this film, everything is so perfect and concise, and Chazelle is able to add his own special charm to every aspect of this movie. Consider the opening sequence, which lasts for about thirty minutes in this three hour film. It is absolutely bonkers, and a perhaps perfect representation of controlled chaos in a film. So much is happening on the screen at once, but it feels like we are never lost nor are we overwhelmed by everything going on in the background.

I absolutely love the way Chazelle is able to switch between all of the different storylines so effortlessly, shifting from one tone to another. Some may complain that there are too many tonal shifts and this film doesn't know what it is trying to convey, but I whole heartedly disagree. I think he does a fantastic job of showing how everyone's role and perception of Hollywood is so vastly different from one another. Consider the beginning of the third act of this movie. We have one of our characters trekking through a terrifying underground tunnel party full of BDSM acts and torture mechanisms, which contains a very dark and depressing tone to it all. We then instantly shift to another character, who is at a very nice and fancy party with a completely different tone to it. However, at the same time, the second mentioned character is almost nihilistic at this point in the movie. The tone of the setting and the scene may be different, but that dark and depressing tone is still constant in terms of that one specific character.

Every actor in this movie does a terrific job of totally embodying their character, especially Pitt, Robbie, and Calva, who serve as the three main characters for this film. They all move with such purpose and each has a different outlook and take on the world around them. Because of that, it influences their role in society and the attitude they carry with them throughout this movie. This gives our actors a chance to play with these roles and make them their own, which I think was perfect for every major actor involved in this movie. The casting is absolutely perfect, and I honestly wouldn't change it in any way at all.

Now, let's talk about that ending. I won't spoil it for those who have yet to see this movie, but the ending truly moved me to tears and made me feel something different than I have felt in other movies. It wasn't a feeling of sadness or anger, but rather moved me in a way that it related to how I felt personally. This movie won't make everyone feel that; in fact, most people might find it odd that this ending moved me so much. But there is something there that Chazelle does to show his appreciation of cinema and those involved in filmmaking that is so beautifully raw and powerful, and it is all told in the last ten minutes of this film. It was there throughout this whole movie, but it really hits home, for me personally, in those last few minutes before the credits roll. Chazelle is known for his powerful and moving endings, but I think this was the best ending he has ever delivered, and very well might be one of my personal favorite endings of all time.

This entire movie wouldn't have worked as well as it did however without the beautiful score from Justin Hurwitz, who also did the other three Chazelle films as well. There are hints of the music from "La La Land" and "Whiplash" found in this score, while it is able to perfectly maintain its own beautiful tone and complexity throughout the entire film. It adds a much different feel to this film compared to the other Chazelle films, and is simply an amazing film score by the wonderfully talented Hurwitz.

Chazelle has proven himself time and time again, which is a major reason why he is without a doubt one of my favorite filmmakers of all time. I think all of his films are absolutely stellar, and this movie is definitely one of my top favorites by him, while also being in the top three for this entire year. It is very rare when I feel like I have seen a masterpiece in cinemas anymore these days, but I knew that was exactly what I was watching throughout the entire three hour runtime. Kudos to you, Mr. Chazelle, and I genuinely can't wait to see what you come up with next.