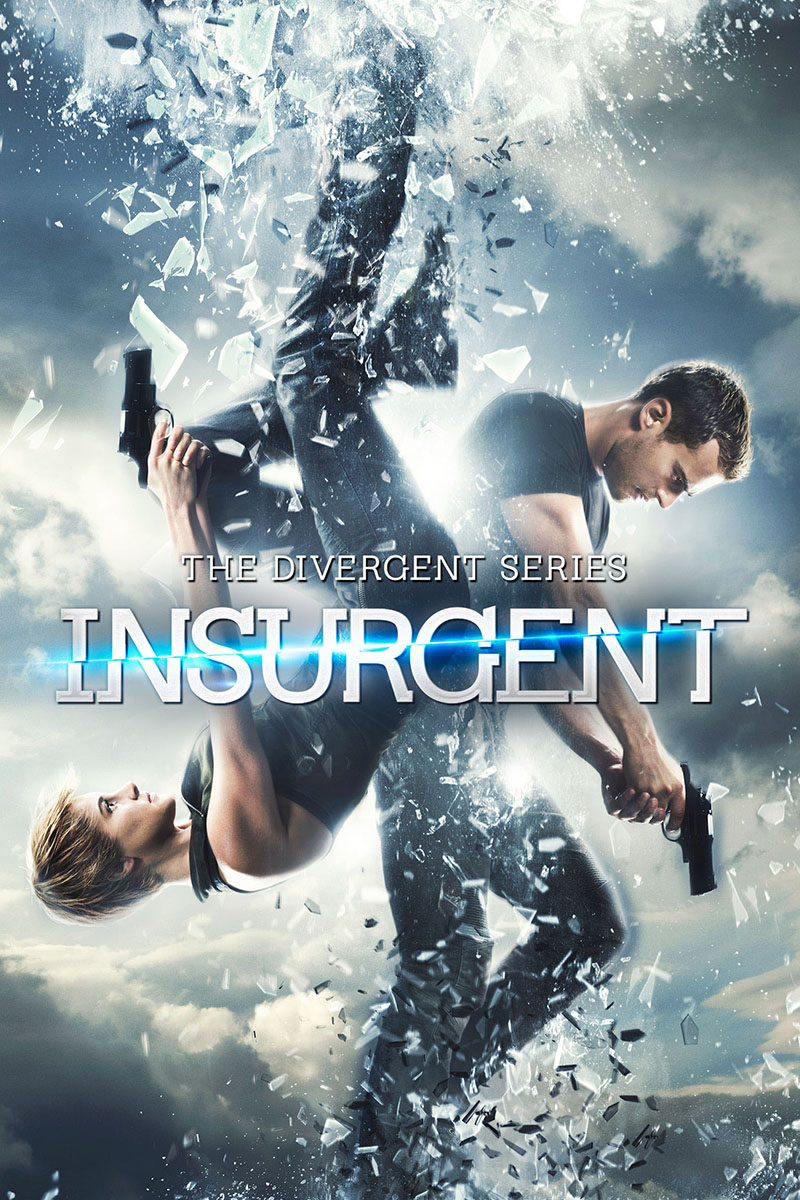 At the end of "Divergent", Tris (Shailene Woodley) and Four (Theo James) are now practically factionless, forcing them to ride the train to the end of the line and figuring out their next move there. With the world in shambles after the Dauntless attack on Abnegation at the hands of Jeanine Matthews (Kate Winslet), it is up to the two heroes of this franchise to save everyone, while also trying to keep each other alive due to their love for one another. Sounds like almost every other Dystopian YA novel, huh? Well, this film practically does the same as its predecessor, just worse, giving a sort of entertaining film that is both unoriginal and not as smart as some of the other dystopian films that have come out in recent years.

The thing about this movie that makes it necessarily worse than the first film is that it is kinda all over the place. The film is so convoluted and busy that it doesn't know how to focus on one main storyline or character arc. Because of this, the film sort of seems like a 2 hour mess where we are just witnessing a bunch of events that have no real intelligent correlation with one another. At the same time, the filmmakers take many of the plot points from the book, and either exclude them or change them so much that it seems foreign to the actual source material it is based upon.

At its core, the story follows Tris and Four as they arrive at the safety of Amity, hoping they can recoup and figure out their next steps. However, when they are infiltrated by Jeanine and Erudite, they are forced to go on the run, hoping any other Faction will take them in. At the same time, Jeanine has found a box left by the Faction's founders, which will explain to them what the Divergent are in their society and what must be done to them. Hellbent on opening the box, she tortures and eventually kills Divergent members, who have to go through all of the tests to open the box.

When Tris proves to be the perfect candidate for completing all of the tests and opening the box, she is now being hunted by everyone in the city of Chicago, forcing her and her friends to go underground with the factionless, which is ran by Four's mother (Naomi Watts), who left Four and his father, Marcus (Ray Stevenson), when he was very young.

It it seems like a lot, that's because it really is. The film is very unfocused and doesn't know which characters or plot lines it actually wants to follow. Because of that, the stories that the film tries to tell really doesn't work. We have to worry about if Tris and Four are safe, but also there is Jeanine conducting the experiments on the Divergent members of society. Then, there is Four with his mommy issues, as well as dealing with his abusive father. Then, we are introduced to multiple new characters who don't really have a real reason of being in this film other than being used as plot devices for a bigger event that makes no sense. As you can tell, the story is really convoluted and overall just very messy. Because of that, the story really doesn't work or is very interesting.

I also think this movie really ruined the character of Tris. They take what they had in the first film, and totally flip her character upside down and make her a sort of unlikable protagonist. Even though she has been through a lot and her innocence has been ruined, they really made her character into a bitter and rude person. It shocks me why the characters in this film would want to interact with her due to how rude and mean she is to the other characters. Then, at the same time, even though she barely trained and the only difference between her and the others is that she's Divergent, they turn her into a real superhero in a way. This is absolutely impossible, and it really changes how the viewer would view these films and this franchise as a whole.

Even though the story isn't told very well, I applaud the performances from Woodley and James, who really give their all into these performances. They are able to distract the viewer from the bad storytelling with fun and energetic performances that really help carry the movie along. However, those are probably the only good performances. Everyone else, including Miles Teller, kind of just blends into the background and doesn't really have a big or important role. Then, with Jeanine being the antagonist, she isn't threatening or scary whatsoever, and is a pretty crappy bad guy. I didn't feel scared for the characters at all throughout the entire film.

I'm not sure if the filmmakers wanted this to be more edgy or have a bigger story to impact the viewers, but none of that worked. The only real thing from saving this movie from being absolutely horrible is some of the stellar action sequences and CGI, while also letting Woodley and James give some decent performances. While the first movie is actually quite enjoyable, this movie is sort of a dumpster fire that is barely holding on.