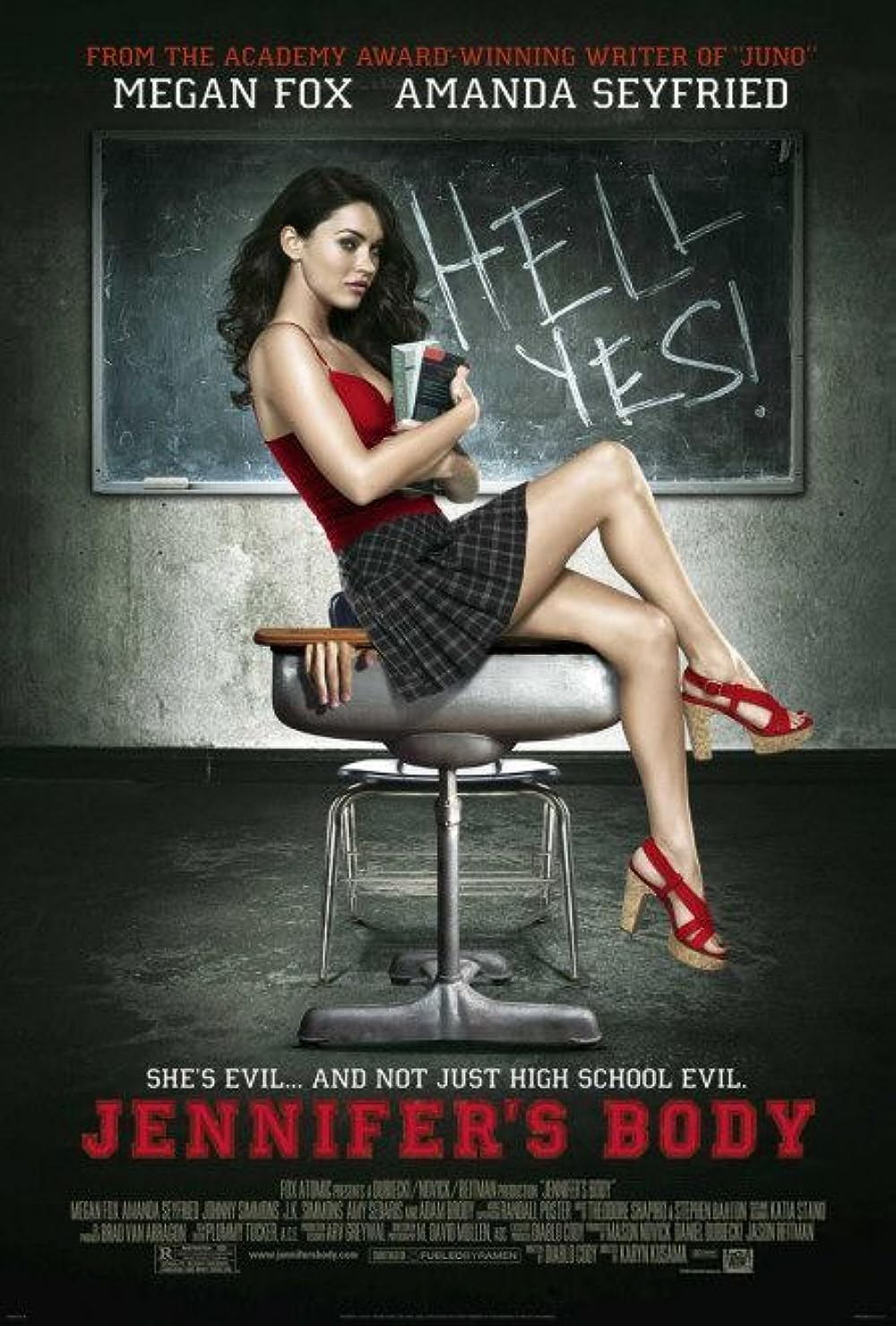 In every high school, there is the classic mean girl. Whether she is the head cheerleader or her family is wealthier than everyone else's, her sole purpose in that school is to make everyone feel horrible about themselves. That's the role of Jennifer in this film, played by the delightfully creepy Megan Fox. She is self-obsessed and is the typical mean girl. However, when a sacrifice to Satan goes wrong and she is now left with a hunger for human boys, what ensues is a comedic and chaotic hour and a half, which does a decent job of blending together the comedy and horror genres.

The movie opens up on a narration from another girl named Needy (Amanda Seyfried), which is a nickname that might poke fun at people like her in high school. She describes how she's been best friends with Jennifer for as long as she can remember, which, as she notes in her narration, is odd to see the hottest chick in school be friends with perhaps one of the nerdiest. However, when Jennifer is suddenly transformed into a blood-sucking demon (this film, as a whole, could easily be described as a man's version of "Twilight"), she starts to terrorize the town, putting everyone at risk, especially Needy.

This serves as a spoof in a way, mocking the roles of society in high school. Jennifer is portrayed as such a dummy that no one would suspect she has anything to do with the graphic murders that are taking place around the tow. In actuality though, she is using her innocent-like charm and her good looks to seduce boys into having sex with her, which she then shows her true nature and destroys every victim that comes in her path. This is such great writing from Diablo Cody, who penned this screenplay after her excellent teenage pregnancy film, "Juno". This seems like a complete 180 from what she did in "Juno", but it shows that she is truly great at crafting these stories around teenagers in high school.

I think Fox did a terrific job in this role. This is her first leading role after playing the eye candy in Michael Bay's "Transformers" films, and this performance really shows what she is capable of as an actress. She may be looked down upon or dismissed by many when watching a film, but she has some serious acting chops. For the horror subgenre here, I think she is the creepiest thing about this film. I would say it's all in her face; consider the scene where she appears in Needy's kitchen covered in blood. She compliments her dirty face with a sickening smile, which is genuinely affective in creeping out the viewers here.

At the same time, the movie does a great job in building up the suspense, but is then followed by cheap horrors and thrills. It's typical for a film like this to do that, but I think it could have been even greater if they put more effort and ingenuity into making the jumpscares and horror elements much better. On the flip side, I think the comedy elements are much better here. It's very dry in a way, and this is thanks to the perfect delivery of Jennifer's lines. From lines like "Do you have a tampon" after being stabbed to "Where do you get all of your murder weapons? Home Depot?", it just works on every level imaginable.

The film does start to slow down in the middle, and kind of muddles its way to the finale. It feels like Cody had all of these good ideas for the beginning and end that she didn't really focus on crafting a good middle part of this movie. I would say that matters quite a bit to a film being successful at what it is going for, but Fox gives such an electric and fun performance that it kind of makes you overlook the poor writing in the middle at times. Does it do enough though to distract from the meandering plot for about thirty minutes? I don't think so, but that is ultimately up to the viewer themselves.

Another thing I would mention here is that I wish we saw more of Needy's boyfriend, Chip Dove (Johnny Simmons). I think he gave a very fun and energetic performance, and it was just nice to have an upbeat and bright character on the screen. He is one of those characters that you ultimately root for, and sort of like better than the actual leads themselves. It seems like Cody is a fan of those as she wrote Michael Cera's Paul Bleeker in "Juno" in the same manner.

This is a pretty decent comedy-horror hybrid, and it is an enjoyable watch as a popcorn flick. It doesn't do anything to completely change either genre, nor is it a great film. What it is is an entertaining little film that was simply made for pure enjoyment, and I do think the filmmakers made a very enjoyable film. It may be silly and simple at times, but I'm honestly OK with that.