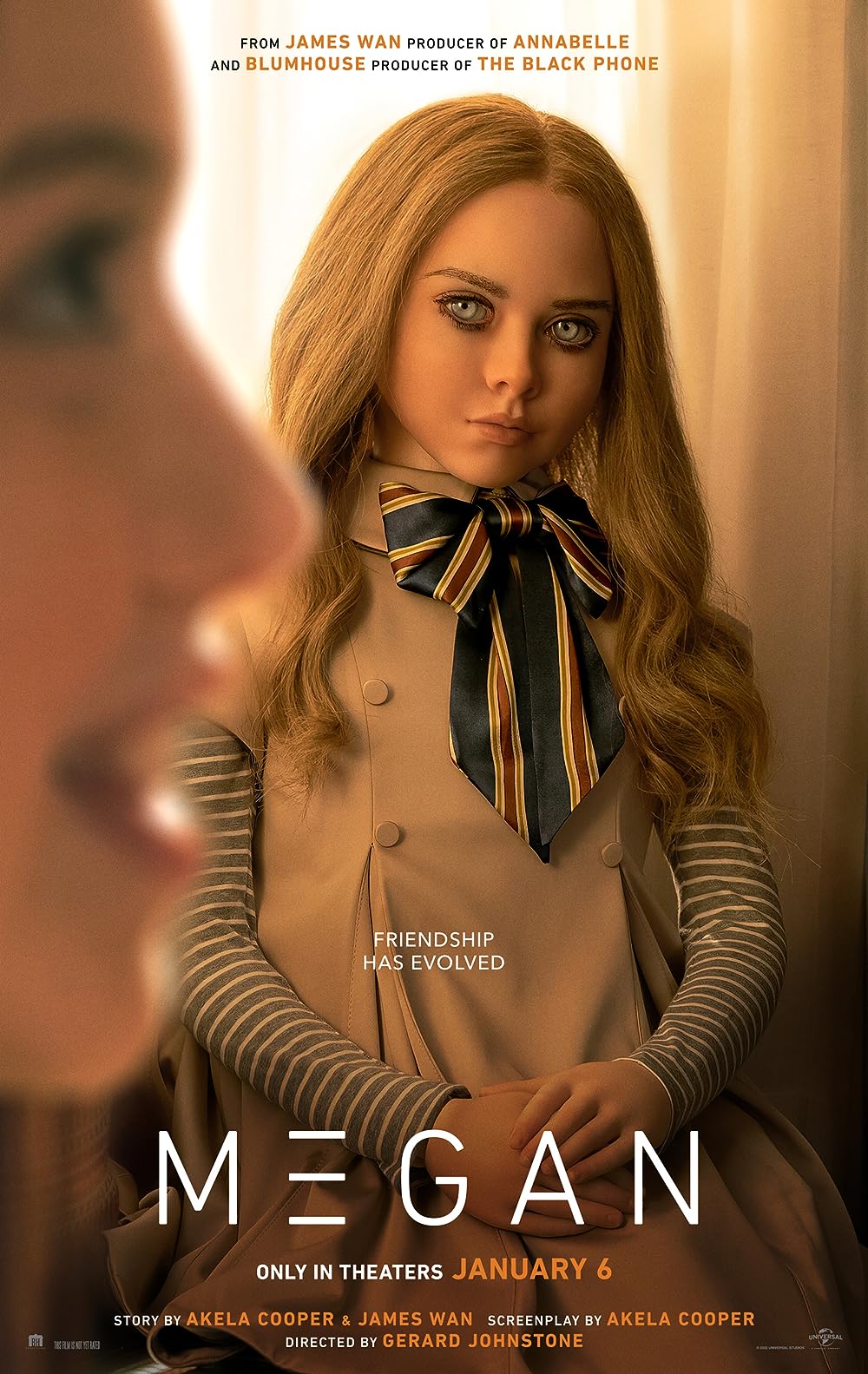 The first time I saw any advertising for James Wan's newest project, "M3GAN", was on social media, when she was dancing down the hallway to her next victim. It was then I knew that this was going to be something big, and obviously, it went viral on every social media platform imaginable. It was then accompanied by a new trailer showing her hunting a young boy through the woods, in a style that can be compared to that of Regan MacNeil from "The Exorcist" and Samara Morgan from "The Ring". I was definitely interested in seeing how Wan and Akela Cooper would craft this film, and I was definitely not disappointed by the outcome, as they delivered a fun and enjoyable little horror flick that has given Chucky a run for his money.

The movie opens with an advertisement for the hot new toy out on the market today: a little creature-looking thing that can interact with their user through an app, and does commands like speak, eat, and defecate when it needs to. We then cut to a family driving in the car, and the little girl in the backseat named Cady (Violet McGraw) is obsessed with the newest fad, blocking out her bickering parents in the front seat during a snow storm. When a collision with a snow mobile take away her parents, Cady is now orphaned, resulting in her staying with her Aunt Gemma (Allison Williams).

Gemma is a toy designer, and is looking for the next big thing to put on the market. With help from the young mind of Cady, Gemma comes up with an idea of making a humanoid robot for children that will stick with them and help them through anything they need. Titled M3GAN (movements performed by Amie Donald and voice performed by Jenna Davis), this new human-like doll can now learn everything around her and perform any task their primary user asks of them. However, when M3GAN starts to become way too overprotective of Cady, she starts going on a killing spree, murdering anyone and everyone who gets in the way of Cady's happiness.

The one thing I absolutely love about this film is that it knows exactly what it is. It isn't trying too hard to be scary or terrifying, but rather it delivers a creepy little horror movie that has loads of comedic elements in this film. Someone had described this movie as the horror film for the TikTok generation, and I completely agree. Yet, at the same time, the filmmakers don't make it overtly cringey or make it annoying, but rather use those satirical elements to its advantage. Consider the scene where M3GAN is doing TikTok dances down the hall before brutally murdering the victim running away from her. Obviously, we have seen this before, in terms of characters like Michael Myers and Freddy Krueger chasing after their victims. But, we've never seen a murdering doll dance after someone, which makes this movie much more unique and comedic than any other type of film in this genre.

I think it moves at a very nice pace, and never drags or slows down much. Sure, there are scenes that could have been trimmed or removed from the overall product, but it doesn't mess with the tone or pacing of this movie. Wan and Cooper are able to craft these characters and events in a way that it makes you appropriately cheer for when someone is killed and makes you feel sad when one of the beloved characters are close to dying, which I think many horror movies struggle with honestly. One thing I would definitely point out that I didn't like was the writing of Cady's character towards the end of the film. The actress does a phenomenal job of doing what she was given, and I know it is supposed to represent the effects of addiction in a way, but her character is extremely annoying and too much. They could have easily dialed that back a little, because it ultimately makes her an unlikable character during the film's conclusion. They do redeem her at the end, but it takes a lot.

Williams does a fabulous job, and it seems like she is just living a normal life rather than portraying a character. That is another problem with modern horror movies, trying to make their characters seem so normal that it seems fake. But in terms of Williams' performance, I think she does a pretty good job and I did enjoy her character quite a bit. Compared to Aubrey Plaza's character and performance in the 2019 reboot of "Child's Play", Williams looks like an Oscar contender here.

But, let's talk about the real standout role here - the two girls who play M3GAN. Not only do they give the best performance of a creepy doll in a horror movie, but they are so damn fun as well. I absolutely love the dialogue M3GAN is given, and they are perfectly performed by both Donald and Davis. The way they are able to perform together really makes them seem like one person, and M3GAN is without a doubt the best character in this movie. Thankfully, we were given a lot of screen time for the creepy doll, which I think other horror films lack. Overall, for her character, I think it is one of the best horror antagonists in the past five years.

I wasn't a huge fan of Wan's "Malignant", so I wasn't so sure how well this movie would turn out. But, I was pleasantly surprised, and I think he delivered the horror movie to beat this year. From beginning to end, it kept me engaged and entertained, which is perhaps the most important thing in a film like this. Sure, it has its flaws, but I would genuinely say the entertainment value completely outweighs any flaws I see in this film.