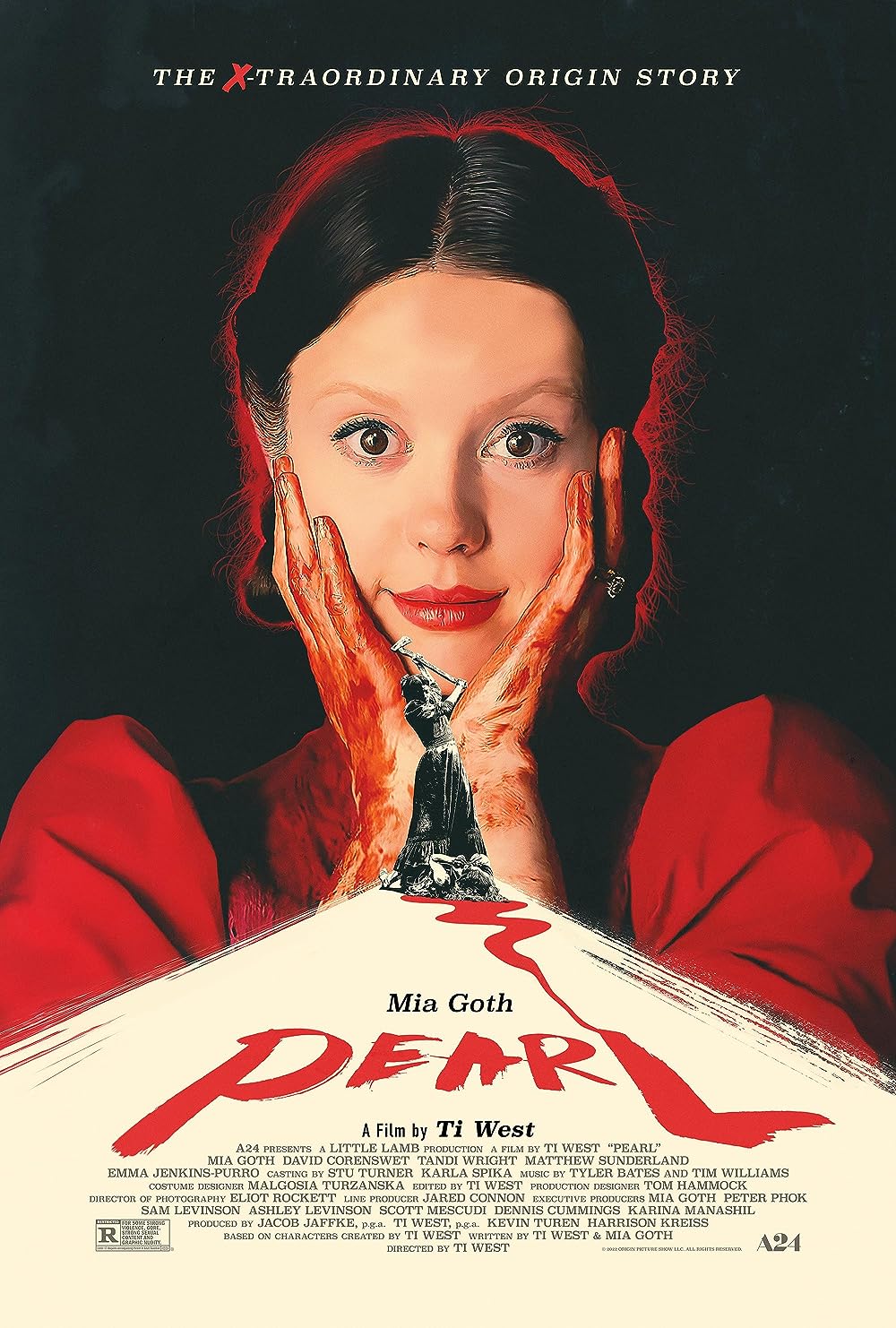 After the credits roll in Ti West's 2022 explosive slasher film, "X", there is a promo for an old-timey film that shows the life of a young woman named Pearl (Mia Goth), which is the younger version of the old lady who committed all the murders throughout the entirety of the film. The audiences didn't know if this was going to be an actual film or just a fun little Easter egg that West added at the end of his film. Surprisingly, West and Goth release "Pearl" around six months after the release of "X", revealing that they were able to shoot it at the same time as "X". While "X" is a more fun and campy slasher film, "Pearl" is a terrifying film about the making of a serial killer, which has a show-stopping performance from Goth in the role.

Pearl is a young adult who has dreams of being in the Hollywood pictures. Whenever she goes into town to get medicine for her father who has influenza, she usually stops at the local movie theater to watch the films with the dancers. Her dream is to become a dancer, and she will achieve that dream come hell or high water. She meets an unnamed projectionist at the theater (David Corenswet), who offers to let her come see any movie whenever she wants. She then starts a romantic affair with him, even though she is married to a soldier who is off fighting in World War I.

An opportunity arises in her local town for her to tryout for a dance troupe, which is like the ones she adores to watch in the movies. She is ecstatic for the opportunity to put herself out there, alongside her sister-in-law, Mitsy (Emma Jenkins-Purro). However, due to her devoutly religious mother (Tandi Wright), it seems like her dreams are just that, dreams. So, with her trusty pitchfork, she devises a devious and murderous plan that will get exactly what she wants in life.

The movie contains a very simple plot, which is good for a slasher film, yet it tries to stretch that over an almost two-hour movie. Because of that, there are parts that feel like they're moving very slowly or just lingering around until we can hit the next plot point or scene. This movie is supposed to feel like a very slow burn, but it does sometimes feel lost within itself, not really knowing where to move next or sure of where it wants to go.

However, with that being said, Goth gives perhaps one of the best performances found in slasher films. She is terrifying, yet so innocent and oblivious at the same time. It seems like she is oblivious to what she is doing or what is going on around her, but she reveals that she knows exactly what she is doing. She is able to flip a switch so easily, going from sweet and innocent to absolutely terrifying, haunting the dreams of whoever will watch this film. She plays both Maxine and old Pearl in "X", but this film really shows what Goth is capable of as an actress and a filmmaker.

One thing I do want to focus on here is the terrifying ending scene to this film. Goth was required to don a terrifying smile for over three minutes long, causing her eyes to water and, from what it looks like, her popping a blood vessel in her eye from smiling so hard. It is perhaps one of the creepiest endings to a film I've ever seen, and bot her and West knew they had something special when they shot this scene. Fun fact, it only took them one take to get it perfectly. Now, that is some dedication and serious acting chops!

Like the first film, the blood and brutal killings are on elegantly on display here, with blood spurting out in glorious technicolor for all of the viewers to see. Obviously, if audiences go to see a slasher film, they expect to see graphic murders and a terrifying villain, which follows in the footsteps of films like "Halloween" and "Friday the 13th". This picture does that perfectly, and even though I think "X" has better kills throughout its runtime, this movie still definitely has what it takes to be a bonafide slasher.

There is one more film that will come out to conclude this trilogy of films, but West and Goth really have something special here. "X" started that, and "Pearl" just showed that they are not just a one-hit wonder when it comes to this franchise. I'm really impressed with what they came up with, and I can't wait to see what they do for the third and final film.