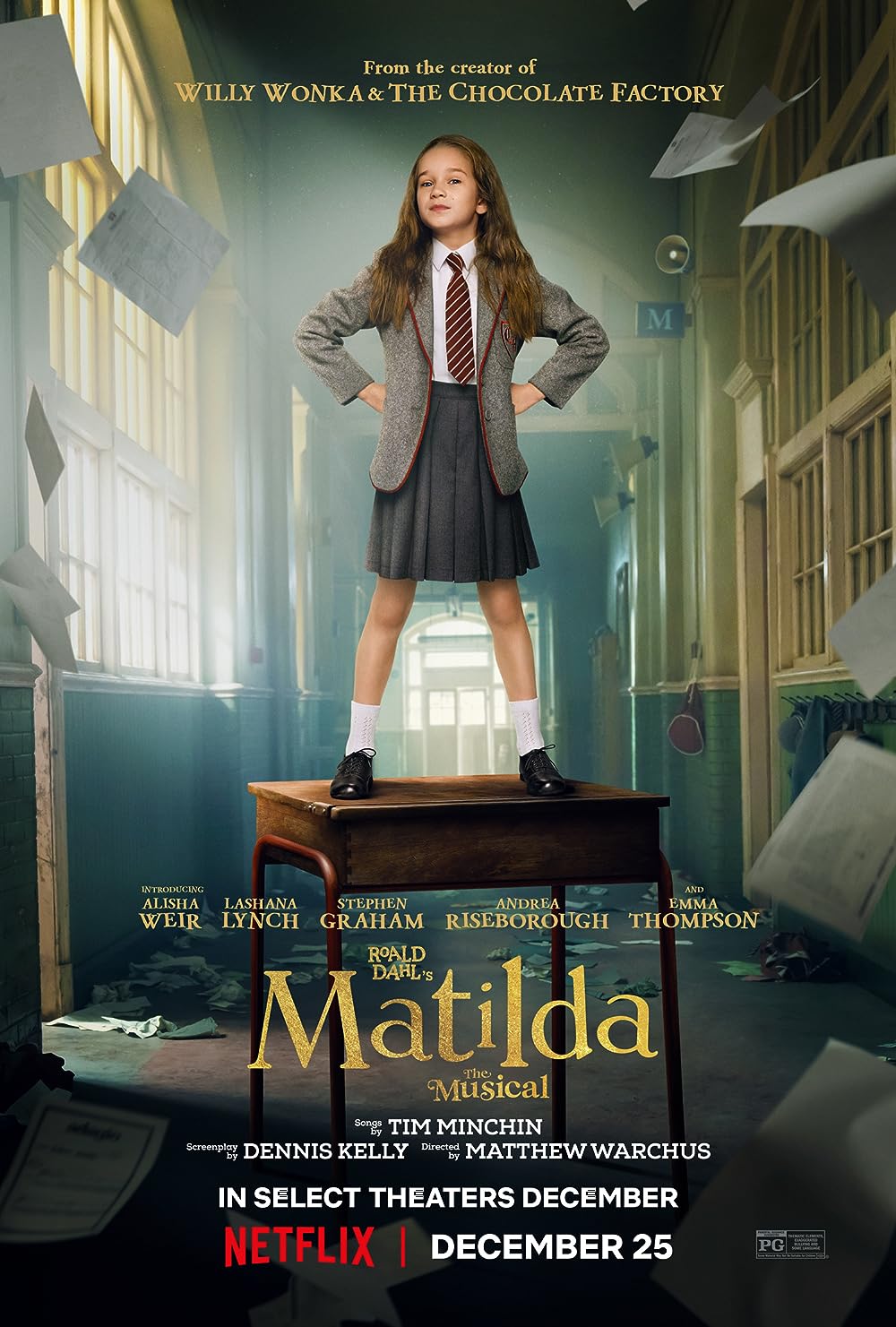 Believe it or not, I'm not a fan of the original 1996 film adaptation of "Matilda", nor am I really a fan of any of Roald Dahl's works or movie adaptations. Because of that, I was not excited for Netflix's "Roald Dahl's Matilda the Musical", nor was it on my radar for a film I needed to watch as soon as possible. However, when I did find a chance to watch this movie, it completely changed my perspective on this story, and I applaud the filmmakers for bringing a newfound fun attitude towards the project. It may not be truly faithful to the book or the original film, but it provided a unique and beautiful take on the story, and I'm personally very happy I gave this film a chance.

The movie opens up on a hospital with a slew of new, happy parents. Every single couple is so joyful to have a new bundle of joy in their lives, singing about how happy they are. And that's when we meet Mr. and Mrs. Wormwood (Stephen Graham and Andrea Risenborough, respectively). Mrs. Wormwood doesn't even realize she's pregnant, and is adamant that she does not want to be a mother. Even when their child is born, they are dismayed that it is not a boy. I think this is personally the best way to start a movie like this. It perfectly sets up what this movie is going to do, and gives the viewer an insight into what is to come throughout the plot.

We flash forward about ten years, and that child grew up to be an unloved and unappreciated little girl named Matilda (Alsiha Weir), who is able to escape the trudges of everyday life through books. When the truancy officers visit her parents and inform them that they will be arrested if their daughter doesn't attend school, they force her to go to Crunchem Hall, which is ruled by an iron fist by the evil Miss Trunchbull (Emma Thompson, who is nearly unrecognizable in the role). However, when Miss Honey (Lashana Lynch) sees potential in Matilda and is impressed by her genius aptitude in class, she tries to help Matilda to the best of her ability become the best version of herself.

Unlike the previous film, this movie is very lighthearted and full of many colors. It practically pops off the page, and contains a very dream-like and beautiful atmosphere. Then, it is wonderfully contrasted with the dreary atmosphere of the school Matilda must attend, which is able to easily change the tone at the drop of a hat. At the same time, I absolutely adore the musical numbers present in the movie, and it makes me wonder why Matilda wasn't originally conceived as a musical in the first place.

Every song featured here has fun lyrics and is able to fully embody the tone and feel of the film, adding a more fun and adventurous atmosphere. I think they are made even greater by the great choreography and cinematography of the numbers, which is able to perfectly focus on the children and the setting around them. Not only did I truly enjoy all of the musical numbers, but I found myself getting lost in them and letting them consume me into the screen.

Weir does a fantastic job of playing Matilda, and this may be a controversial statement, but I think she is better than Mara Wilson in the 1996 film. I think she is just so full of innocence and fun, which she practically oozes on the screen. It is so hard not to fall in love with her character, and you can tell that Weir truly gives it her all. The same can be said for Lynch, who I was very happy to see in this role. She has played many badass characters in films like "Captain Marvel" and "No Time To Die", but this allows her to show her more playful side and really get into the role.

Now, let's switch our focus to Thompson, who is terrifyingly wicked in this classic role. Thompson has been known to change her appearance for film roles, but this is perhaps her most drastic change in appearance. However, because of that, it really sells the role of this mean headmistress, in combination with her tragically beautiful performance as the mean lady. I applaud everything that Thompson was able to accomplish with this movie, and I think she is perfectly matched with Weir's Matilda.

There are things I didn't like about this movie, but it's no fault of the filmmakers. For example, I absolutely despise the cake eating scene in the original movie. I find it hard for me to watch, and I was dreading for that scene to come up in this film. While it was majorly toned down and not as grotesque, I still found myself not enjoying the scene or the musical number much. At the same time, there are some Dahl elements present in this movie (such as when Trunchbull pulls on a kid's ears and they comically stretch) that I wasn't a fan of. Like I mentioned, this is a film based on Dahl's work, but I just don't enjoy that type of comedy and humor.

Overall, I'm surprisingly and genuinely impressed by everything this film did, and I really did enjoy this film to the fullest. It was a very big surprise, as like I mentioned, I was not looking forward to this film whatsoever. It would be interesting to see if they can bring musical adaptations to other classic children's films, and I honestly am very excited to see what they could come up with next.