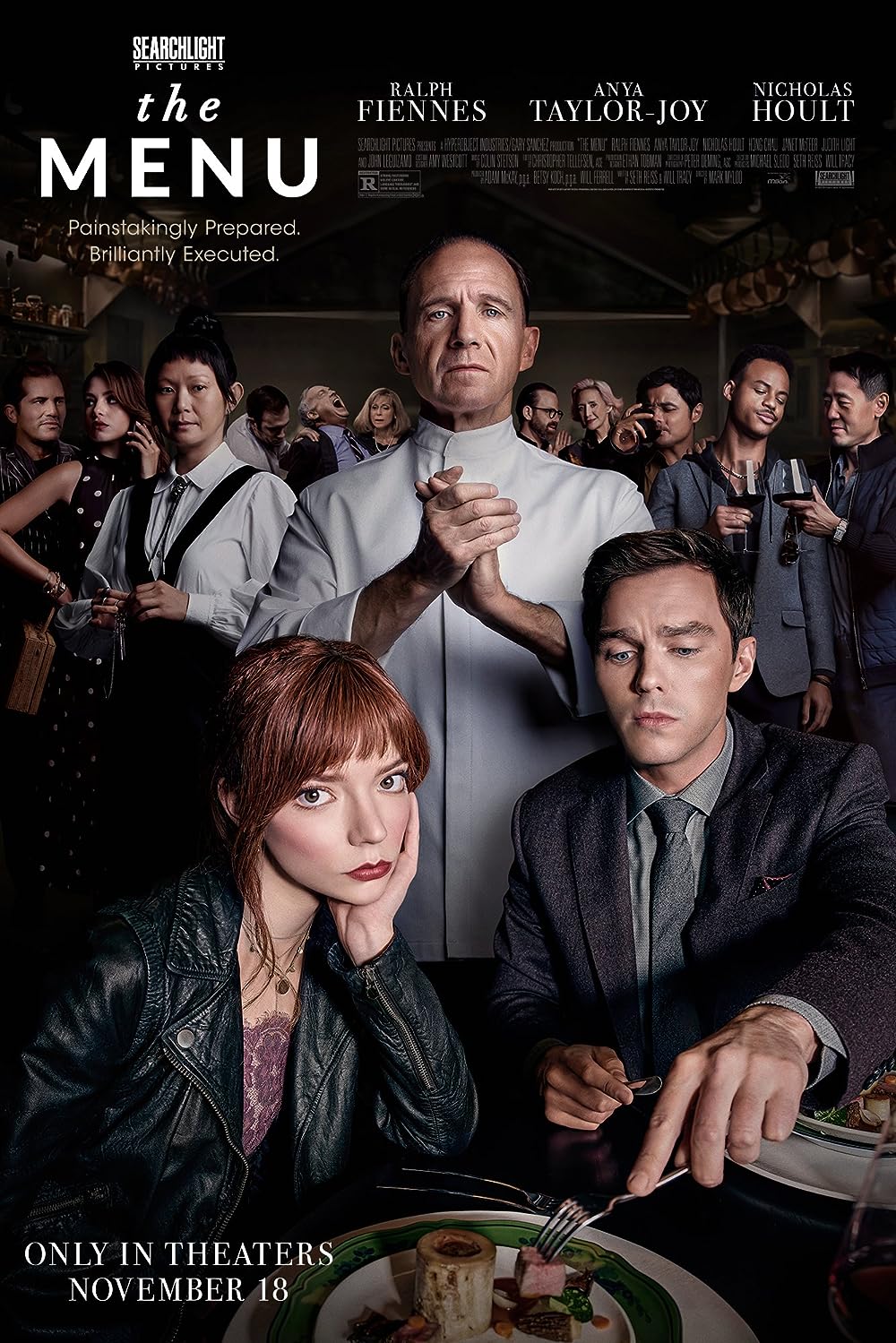 Mark Mylad's "The Menu" is an interesting film. The script is great, the acting performances from its stars Anya Taylor-Joy, Ralph Fiennes, and Nicholas Hoult are stellar, the cinematography is beautifully haunting. Yet, I'm not sure if I absolutely loved it or if I absolutely hated it.

The movie serves as a satirical play on horror/thriller films, while also trying to thrill the audience watching this movie at the same time. In both factors, it does an excellent job of achieving what it is trying to do. I laughed, I was shocked and scared for some of the characters, and I found myself compelled to find what is going to happen next. But, I don't think I necessarily enjoyed myself. When I usually go see a horror or thriller movie, there are usually parts of the certain film that I genuinely love and find myself enjoying. Yet, I never found myself doing that in this film. I can't argue that this is extremely well-made and haunting, but perhaps the dark humor in this film fell flat on me?

The first time we see our main characters is when they are about to board the boat to head to a private island, which sits a restaurant that is ran by celebrity chef, Julian Slowik (Fiennes). The man in the couple, Tyler (Hoult)b berates his date Margot (Taylor-Joy) for smoking before they get there, claiming it will ruin her palate so she won't be able to efficiently taste the dishes at the restaurant. He seems very obsessive over the restaurant and the chef, who he practically looks up to like a God.

They are joined by other very rich guests, which include performances by Janet McTeer, John Leguizamo, Rob Yang, and many more. When their courses are presented by Slowik with some haunting dialogue and unsettling acts from the chefs in the kitchen, it starts to put the guests on edge, as well as secrets of infidelity and lying being revealed through the course of the entire meal. However, when they get to the fourth course, it is then made known that this is no normal dinner, and the guests are in for some devilish surprises.

The build-up to the actual horror elements in this movie, which is about forty minutes long, is actually quite boring to me. I think they could have easily set this up in a more entertaining way, rather than watching the patrons eat and argue with each other for forty minutes. I'm not saying I need this grand amount of suspense or any major surprises, but I don't find this beginning segment of the film very entertaining.

Then, when we do get to the second half of this film, the surprises and suspenseful acts that have been so built up fall flat. Sure, it's unsettling and at times hard to watch, but as a viewer, I have seen way worse in other films. This movie thinks it's very smart and knows how to affect the audience, but it overestimates itself and its abilities. This is nothing against the cast or their performances, but rather the storytelling and writing for this movie.

Concerning the directing and the acting in this movie, I think it is all done very well. Fiennes and Hoult give electrifyingly performances that are as terrifying as they are uncomfortable. You don't really know how to feel about these characters, and their acting definitely makes you shift uncomfortably in your seat. On the different side of the coin, Taylor-Joy plays the "normal" character of this film. She is the character that would be any normal person going to this joint on the private island. However, she is as amazing as she is in all her other films; one thing about Taylor-Joy is she is so consistent with these excellent acting performances she has been giving lately. She is definitely one to watch in the future.

This is all led by Mylad, who directs the script that was written by Seth Reiss and Will Tracy. Everything in the movie is so methodically shot and he is able to get everything he wants to in every shot of this frame. While many movies I have seen focus solely on the one or two main characters and leave the rest of the supporting cast in the background, this movie treats everyone as the main character, and we start to fully learn about the other characters and their reactions to the events that take place. I really do applaud the director for including this as it gives different insights of the events.

I also rather enjoyed the cinematography by Peter Deming, who has shot other fantastic films like "Evil Dead II" and "Mulholland Drive". He is able to focus on the thing the audiences needs to see, while also catching everything going on in the entire setting at the same time. He proves he is a master behind the camera, and I think he delivers one of the best things about this movie. I also must say I love the shots of food accompanied by the humorous captions.

Besides some of the poor aspects of the script, this movie does everything it needs to be a good film, which it is. I just don't find it very entertaining or compelling to watch. I applaud the roles of the actors, the director, and the cinematographer, but I just don't find this an enjoyable watch nor would I ever feel compelled to watch this film again.