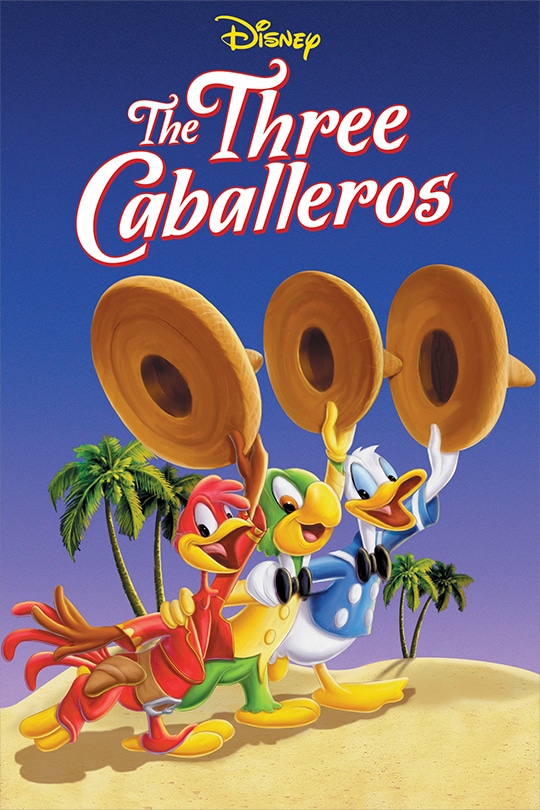 The Three Caballeros is such an iconic trio in the world of Disney. Consisting of Donald Duck, José Carioca, and Panchito Pistoles, this group of ducks not only have a catchy and iconic theme song, but they have been entertaining fans in their first appearance in Disney's 1944 package film that is titled after the group of singing birds. This collection of short films is much different than the other package films that Disney released during this time, only containing a couple of short films before focusing on the main story that the film is named after. While this won't be for everyone, Walt Disney and his team of animators deliver a fun musical appreciation of Latin America.

The film opens on Donald celebrating his birthday (which is coincidentally Friday the 13th), and he has been given numerous presents by his friends. The first three presents are home videos focusing on different birds and bird-like creatures. The first of these is about a little penguin named Pablo, who is sick and tired of living in the cold environments. Because of this, he decides to take matters into his own hands and try and move into a much warmer environment, passing by Lima and Quito before eventually landing on the Galápagos Islands. This short film is pretty cute and funny, yet it is very forgettable when considering the other shorts and segments that appear in this film. It sort of reminds me of the old Mickey Mouse shorts that premiered before Disney started making feature length animated films, in terms of style and story. Yet, I don't really think this short film reached its full potential, and just sort of serves as a filler for the runtime,

After the first short film, Donald is then presented with a short segment that is about the crazy birds of Latin America, especially a bird called the Aracuan bird, who is known for his eccentric song. This segment isn't very important nor rememberable, but he serves as an occurring character throughout the rest of the movie, and some of the antics he gets up to are pretty fun to watch. We then shift focus to a man narrating about his life as a kid, where he came across a flying gauchito, which is a winged donkey. He narrates about the time him and his flying donkey were able to compete in a race and win. Now, this short was a lot of fun. I would say it was much better than the previous one about the penguin, and contains a lot of heart throughout the little short segment. I think this is perhaps one of the best segments in Disney package films, and it reminded me a lot of the fun and wild shorts that Goofy usually stars in.

These are the two segments we do see until Donald opens another present, which is a book that tells the story of Baía. It was given to him by José, and that is when he joins the movie as well.  For the next few segments, he takes Donald through a journey of the Brazilian state, showing him everything special and beautiful about the place he came from. This entire segment is so beautifully animated, and the accompanying singing and music is absolutely stellar. This whole segment is perhaps one of my favorite things from any of the Disney package films, and it gives the viewer a sense of wonder and joy when watching. At the same time, this is the first animated film to ever be combined with live-action, paving the way for "Mary Poppins" to do so about twenty years later. Even though this film was released in the 40's, the combination between the two is still so beautifully done and it's amazing what the filmmakers were able to accomplish during that time period.

Donald opens his next present after him and José get back, which is a piñata from their new guest, Panchito, which completes the trilogy and now lets them explore the country of Mexico and everything special about it. They do this until the end of the movie, exploring the country's traditions, heritage, nightlife and city, and much more! I think this part is just as great as when they were exploring Brazil, and the three characters all have great chemistry together and are all really fun to watch on the screen.

However, there are a couple of things I should point out about this film. The first is that this will not be for everyone. At times, it reminds me of films like "Fantasia", in terms of a lot of it is singing and dancing with no really clear or concise plot. It is just an exercise in style, while also showing that Disney is sending messages of goodwill to Latin America during the World War going on at the time. Because of that, it is mainly educating and showing how much Disney and his studio appreciate the other countries, rather than trying to present a clear and present story that their previous films did before. Another thing I would mention is that the ending for this film is rather creepy. It reminds me quite a bit of the "Elephants on Parade" scene in "Dumbo", with the creepy animations and style to it. I'm not sure why Disney felt it necessary to conclude this series of short films on such a creepy note, but it definitely takes away from some of the fun and joy that this movie as able to set up.

Overall, I think this is one of Disney's best Wartime package films. Is it for everyone? Of course not, but I'm sure audiences are going to be able to appreciate what Disney did and what they were ultimately going for. Even if you don't like this film or the short segments contained in it, it is impossible to deny that Disney did create one of their most iconic trios, consisting of three of the craziest and most entertaining birds you will ever meet.