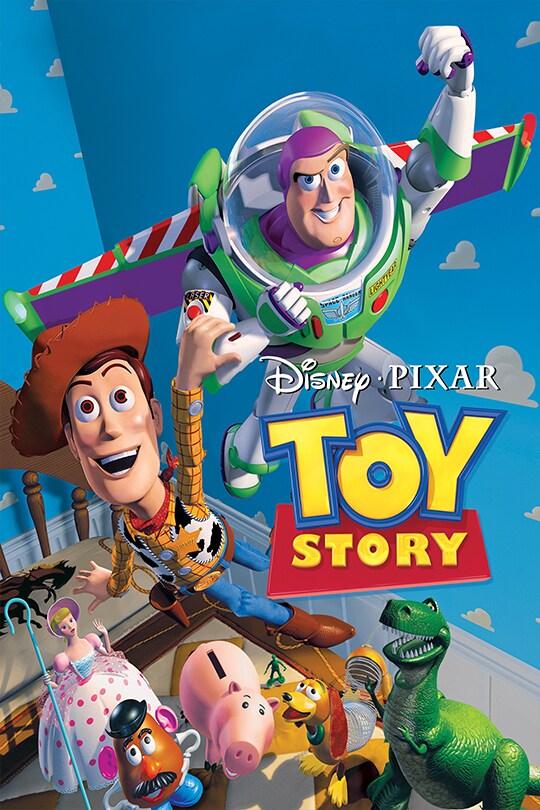 If Disney was all started by a mouse per Walt Disney's famous saying, then Pixar was all started by Woody and Buzz Lightyear, the main characters of Pixar's first film, "Toy Story". This film is not only the movie that made Pixar one of the most beloved film studios of all time, but is a staple of animated films, being the first one to be fully animated using CGI. Not only is this movie visually stunning for its time, and gives us some of the most iconic animated scenes ever, but has a fun and heartwarming story that gave the audience in 1995 a glimpse of what Pixar has in store all these years later.

The movie follows the toys of a young kid named Andy (Donald Reignoux), especially his favorite toy, a cowboy named Woody (Tom Hanks). Woody sort of becomes the leader of the pack of toys, which include Mr. Potato Head (Don Rickles), Slinky Dog (Jim Varney), Hamm (John Ratzenburger), Rex (Wallace Shawn), and so many more. Everything is peaceful and tranquil in Andy's room, with the toys pretending to be lifeless when their kid plays with them, and then having their own relationships and correspondence with one another. Every kid practically imagines what would happen if their toys were real and came to life, and this film basically answers that question.

However, on Andy's birthday, he receives the hot new toy that has just came out, a Buzz Lightyear (Tim Allen) action figure! Scared that this toy will throw off the balance of the community in Andy's toy chest, they are leery of the new toy, who turns out to believe that he is the actual Buzz Lightyear. He is able to easily befriend everyone in the toy community, except Woody that is, who is jealous that Andy has been spending a lot of time with his new toy. Planning all these possible ways to get rid of Buzz, Woody accidentally leads them on an adventure that practically means life and death for the two toys.

The first thing you will notice when watching this film is how different the animation is compared to the animated films that have come before it. This movie was fully animated using CGI, adding a more real-life feel to the film. I think this is a massive advancement in animation, and it provides the basis for everything that animated films use today. Anymore, it's hard to imagine an animated film in the past twenty years that hasn't used CGI at all in their finished film. Because this animation style is fully CGI, it really does add a more real effect to all of the characters and settings, making our characters feel like actual toys popping off the screen.

The thing I love most about this film is its characters and the way they are written, as well as the quick-witted and fantastic dialogue on display. Hanks and Allen give perhaps some of the best performances of their careers in these roles, and it is thanks to them that we really get a sense of who each of these characters are. At the same time, they have fantastic on-screen chemistry with one another, and are able to banter back and forth in such a way that is hard to find two actors do so seamlessly and hilariously. Whenever you think of these characters, for me, I don't think about their clothes or plot lines; I think about the voice talent behind them, which I give massive kudos to Allen and Hanks for.

The story is very well written, and it expresses the message of themes like friendship and acceptance. Woody and Buzz start out as enemies, before eventually becoming friends along the way. It showcases what true friendships actually are, and Woody and Buzz are great at demonstrating at. At the same time, the message of acceptance is displayed throughout the entire film. At first, it is Woody not accepting Buzz due to him being jealous of a new toy replacing him. Then, when we move into the latter half of the film, it's due to Woody and Buzz accepting the tortured toys in Sid's room, as even though their appearance may be frightening to them, they realize they aren't bad guys but poor tortured souls.

Sid Phillips (Erik von Detten), who serves as this film's antagonist, is a great villain. He doesn't have a huge master plan or an ulterior motive, he's simply just an evil child who likes to cause chaos. He is perhaps the best villain in the Toy Story franchise due to him just genuinely being an evil child, giving off serial killer and psychopathic vibes. I think Detten does a fantastic job of adding that creepy voice to his already established evil and demented vibe.

This is a perfect example of a movie that ushers in a new film studio to the world. Disney knew it had something special with "Toy Story", and it allowed them to explore different films and stories with Pixar due to its massive success. In terms of the CGI animation and the more mature story at times,  I applaud Disney and the filmmakers for taking the risk and seeing if they can make it work. As we can see today, their efforts definitely paid off in the end.