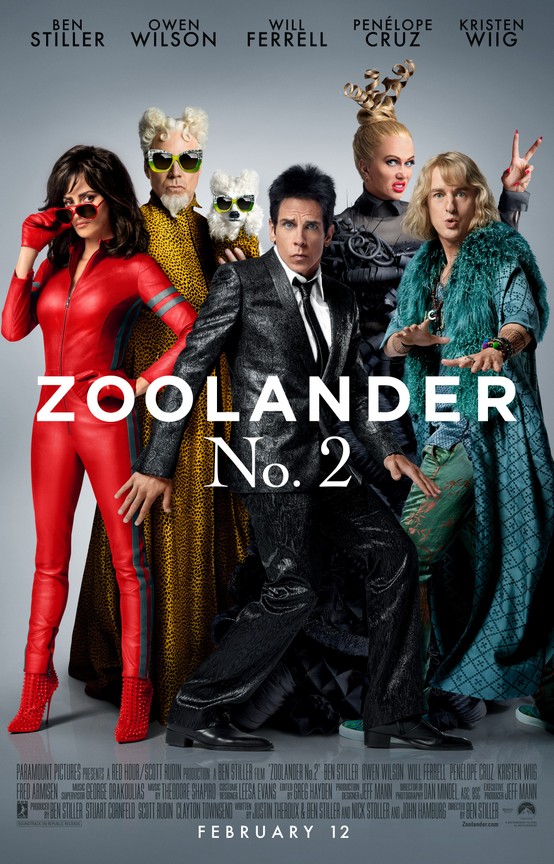 After the incredibly disappointing "Zoolander", I didn't have very high hopes for its sequel. However, I still wanted to see if Ben Stiller and his group of writers could bring back these characters into a modern world and make a better film than what they originally released. While I do this movie is much more bearable than the first film, it still isn't able to bring the humor and storytelling to the level it needs to be to be a compelling and fun comedy movie.

The movie opens up on Justin Bieber (yes, you read that right) being brutally murdered after being chased by masked assailants on motorcycles. However, before he dies, he is able to pull up Instagram and post a selfie of him doing the iconic face made famous by Derek Zoolander (Stiller), who has been in hiding since the tragic death of his wife when his school for children collapsed. With all of these pop stars being murdered and posting their Zoolander face before their death, it is up to Interpol agent Valentina Valencia (Penélope Cruz) to find him and have him help in solving the murders of the famous singers.

Derek is hiding in a cabin when we first see him in this film. He is unrecognizable with his long black hair and beard, masking his "gorgeous" face from the world due to his wife's death and CPS taking away his child years ago. He gets an invite from a major fashion event in Rome, which he sees as his comeback opportunity to be back in the spotlight. When he finds out enemy-turned-friend Hansel (Owen Wilson) is also invited to the same event, they take this opportunity to try and get back in the spotlight.

However, they find out pretty quickly that there is a more devious plan going on. When Derek's son's life is now in danger, it is up to Derek, Hansel, and Valentina to find out who is behind all of this madness and bring them down once and for all. If you're reading this and thinking that this movie sounds much better than the first film, you would be right. The story is much more compelling and interesting than the first movie, but it is not executed well at all. Like the first film, they reply on very ridiculous and stupid humor to further the movie along, when this film could have easily been a funny mystery movie.

Shockingly, I actually thoroughly enjoyed Stiller in this movie. I mentioned in my review for the first film that I hated his character and he was very annoying throughout the film. But I think Stiller was able to see what was wrong with that character and fix the issues that were definitely needed. However, when those issues were fixed with his character, he placed them on Derek's son's character, who's played by Cyrus Arnold. I didn't find his character very appealing or entertaining at all, and I would say his character could have been written a lot better.

I did enjoy Wilson once again, and I also really did like Cruz's character. I thought she was a lot of fun and had a lot of charisma and charm. Now, the first hour of this movie is pretty well done. Not great by any means, but better than its predecessor. That is until Will Ferrell's Mugatu shows up. I love Ferrell, I really do. But this character is awful. He is creepy, disturbing, homoerotic, and he genuinely ruined the entire second half of this movie, and therefore the entire film. Why did he have to make an appearance when he already had a major role in the first and was thwarted? I don't understand their fixation on this character, but I hope Stiller knows Mugatu ruined the entire thing. Nothing against Ferrell, he did his best with what he was given. But c'mon, really?

I certainly hope there isn't a third film so I have to endure another two hours of pure torture. I genuinely don't see how anyone could really enjoy this film when completely sober. I appreciate and I applaud what some of the filmmakers and actors were going for and did succeed in, but the negatives outweigh the positives too much in this film.